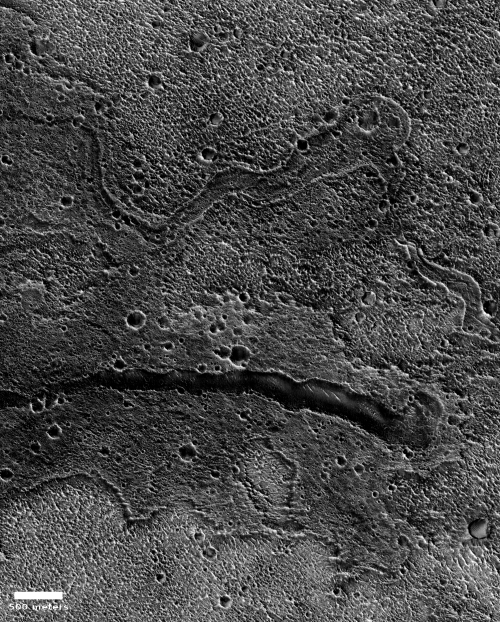 Cool image time! The photo to the right, rotated, cropped, reduced, and brightness-enhanced to post here, was taken on July 6, 2020 by the high resolution camera on Mars Reconnaissance Orbiter (MRO).

This is an uncaptioned image, labeled by the MRO science team as a “Flow-Like Feature in Chryse Planitia,” suggesting that they themselves are not exactly sure about what we are looking at. The latitude is 19 degrees north, which is a bit too far south for finding glacial features. Moreover, the craggy look of the ground here does not suggest an eroding glacier, but of eroding bedrock.

We could be looking at a volcanic feature, but this location is very far from Mars’ volcano regions. Nonetheless, another high resolution image, taken just to the west of this photo and given the exact same label, shows similar geology, and does strongly invoke a look of corroded lava flow.

The overview map below gives the context.

Chryse Planitia is the lowland northern plain that received the drainage down from the giant Martian volcanoes, coming from both Valles Marineris and Kasei Valles. It is also the place that two American landers put down, Viking 1 in 1976 and Pathfinder in 1997. In fact, this image, indicated by the white box, is only about 108 miles west of the Mars Pathfinder landing site where the rover Sojourner roved for almost three months. The photo below shows Sojourner up against a boulder, the image taken from Pathfinder. The ramp that the rover used to get to the surface can be seen on the bottom left. 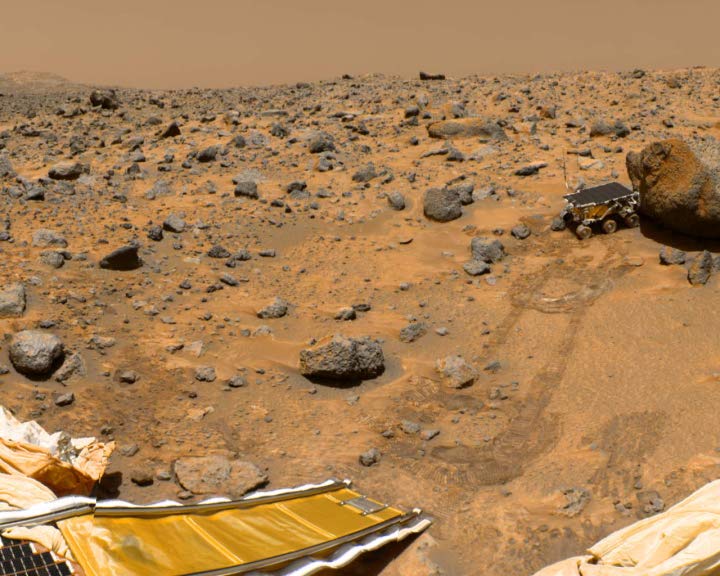 The results from Pathfinder and Sojourner suggested the presence of melted ejecta from impacts, melt from volcanic processes, and sedimentary and rounded rocks suggesting water processes.

None of this of course clarifies the flow feature in the cool image above, as all these process could have created this feature. It only adds to the mystery.