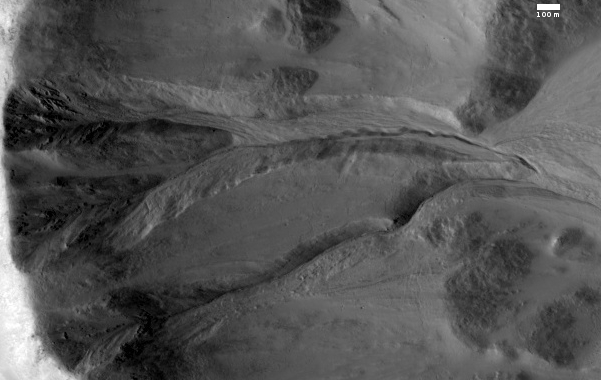 Cool image time! If we were told that the photo on the right was taken by an airplane over some southwest desert gully, no one should be surprised if we were to accept that description entirely. The gully sure looks like a lot of drainages one can routinely see when flying over the American southwest, dry, treeless, but showing the typical dendritic pattern seen for most desert water drainages.

Of course my readers all know that this is not in the American southwest, but on Mars, in a crater located in the transition zone between the southern highlands and the northern lowland plains. The image, cropped to post here, was taken by the high resolution camera on Mars Reconnaissance Orbiter on October 12, 2019.

It appears that this particular gully has been subject to repeated monitoring, since November 2015. A rough and very quick comparison of the earlier image with today’s image does not show any obvious change. This does not mean there hasn’t been any evolution, as my look was cursory, and I could easily be missing changes. Seasonal variations might also be occurring that I could be missing.

The reasons for the monitoring are of course obvious. This gully strongly suggests the flow of liquid downhill. Is that occurring today, or are we seeing the evidence of a past flow from long ago? Only some long term monitoring can tell.

There is also the possibility that we are looking at a buried glacier. The crater is located at 42 degrees north latitude, well within that mid-latitude band where scientists have located many buried Martian glaciers. If so, then the monitoring is to see if that glacier is active in any way.