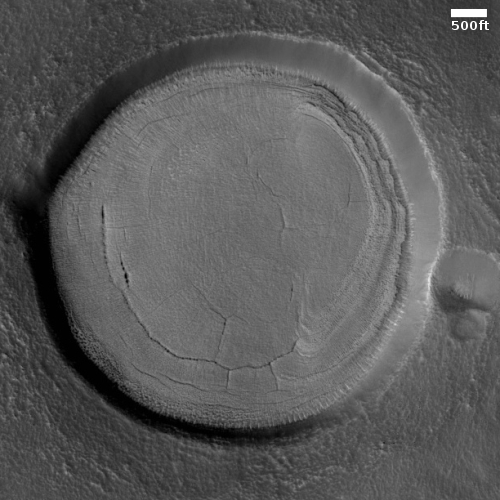 Cool image time! The photo to the right, cropped and reduced to post here and taken on January 7, 2021 by the high resolution camera on Mars Reconnaissance Orbiter (MRO), provides us a perfect example of the kind of glacial feature that scientists find routinely in the 30 to 60 degree mid-latitude bands on Mars. In this case the crater is in the northern reaches of a chaos region dubbed Nilosyrtis Mensae, the easternmost mensae region of what I dub glacier country on Mars.

When first identified scientists named this concentric crater fill, a purposely vague term that is only descriptive because they then did not know what it was made of, though they had their suspicions that it was buried glacial ice. Since then radar data has routinely confirmed that there is ice in such filled craters, making this particular glacial feature one of the most prevalent in those mid-latitude bands.

You can see a quite similar ice-filled crater, also in Nilosyrtis, in an earlier post from October 2020. While that earlier crater was on the southern edge of Nilosyrtis, today’s crater is about 300 miles almost due north, near the region’s northern fringe. In between are lots of similar glacial features, sometimes in craters, sometimes flowing off the slopes of mesas, and sometimes flow features in the open canyons between.