Images reveal changes in Betelgeuse’s shape as it has been dimming
February 14, 2020 10:16 am Robert Zimmerman 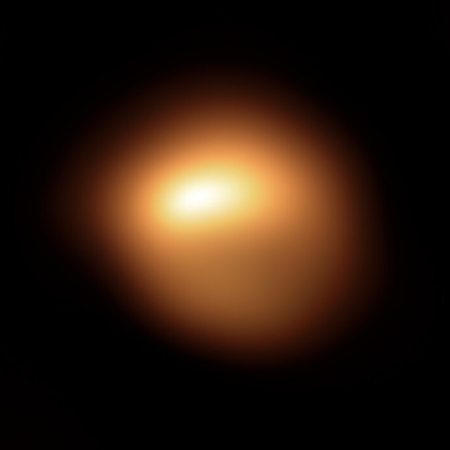 Using the Very Large Telescope in Chile astronomers have produced before and after images of the red giant Betelgeuse, showing the changes to the star in the past year as it has dimmed by about 36%.

The image to the right, cropped and reduced to post here, was taken in December and shows the star in its dimmed state. Below the fold is a short video that compares this image with a photograph taken in January 2019. The star was then more spherical and evenly bright.

Betelgeuse’s misshaped profile and uneven brightness is not actually a new thing. See for example this 2017 image, where I noted that the bulge on the star’s side suggested “that continuous observations would reveal the outer atmosphere waxing and waning almost like the stuff inside a lava lamp.” The star is a giant gasbag that in the past has frequently been observed with dark patches on its surface and a sense that it is not always spherical. Those changes however have not occurred with such a significant dimming, a full magnitude

In late December I had posted a story noting that the dimming appeared to be expected, caused by the alignment of two different regular fluctuations of brightness, one 5.9 years long and the other 0.5 year long. It was expected that the star would begin brightening again.

Right now astronomers estimate that the low point in these cycles will occur on approximately February 21st. If the star begins to brighten following that date it would confirm that this dimming is just part of its cycles. If not, then it could be that we are in the preliminaries to a supernova event that would probably make Betelgeuse bright enough to be seen during the day.