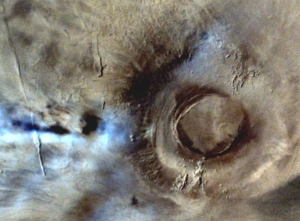 Having successfully completed its nominal six month mission and continuing to operate perfectly, ISRO has extended the mission of India’s Mangalyaan Mars orbiter for another six months.

Take a gander at the images the orbiter has been sending down. Quite impressive. The cropped image on the right shows the western slopes of the giant volcano Arsia Mons, with white water vapor hovering above those slopes. (Click on the image for the full resolution version.) The water vapor is significant because scientists believe that this region once had many glaciers, and that much of that water is still present and trapped below the surface as ice, possibly in many of the caves that are there. The vapor’s presence, a routine occurance here, strengthens this theory.