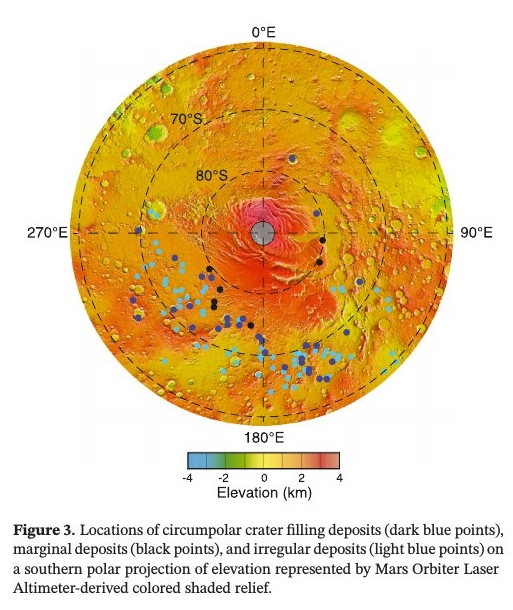 In a paper published today in the Journal of Geophysical Research: Planets, scientists describe the identification of 31 ice-filled craters in the high southern latitudes of Mars. The map to the right, from their paper, shows the locations of these craters. The scientists also took a look at Pluto, and found five craters there that had similar features, though these were likely filled with frozen nitrogen, not water ice.

These new 31 ice deposits represent an inventory of more than 10 trillion cubic meters of solid water, similar to but greater in number and volume than previously studied features near the north pole. Similar features of nitrogen ice may exist in craters on Pluto, suggesting that craters are a favorable location for the accumulation or preservation of ices throughout the Solar System. [emphasis mine]

These results are reinforced by the existence of glacial features found in numerous Martian craters at much lower latitudes, as well as the ice suspected to exist in the permanently shadowed craters on the Moon and Mercury. The processes that put the ice there on these different planets might be fundamentally different, but the results are the same: Ice accumulating within craters.

One aspect of these high latitude craters that remains somewhat unexplained is their asymmetrical distribution around the south pole, favoring the side of the planet south of Mars’ giant volcanoes. Moreover, in looking at the ice deposits within these craters the scientists found that the ice seemed to lie off-center within the craters, favoring a similar direction.

Based on the available data, the scientists theorize that the most likely cause of this asymmetric off-center pattern is wind. From their paper:

Basic physical arguments, mesoscale atmospheric models, and geomorphological observations predict deflection of winds emanating from the south pole by the Coriolis Force. Such deflection results in a general westward trend of winds (i.e., easterlies) in the south polar regions outside the [south pole cap], matching the [ice-filled crater] offsets we observe.

This correlation implies that wind is important in … formation and/or evolution [of craters with ice]. For the case where winds control [their] formation, katabatic winds may travel down the east side of crater walls and preferentially deposit ice on the west side of the crater via orographic precipitation as they flow up the west crater wall. This mechanism thus favors local accumulation of ice within craters.

I find it fascinating that the location of ice within craters on Mars might indirectly provide scientists with information about the planet’s global weather patterns. This unexpected connection highlights the need to dismiss no data or feature in trying to understand planetary formation. Unlikely things might answer our questions.