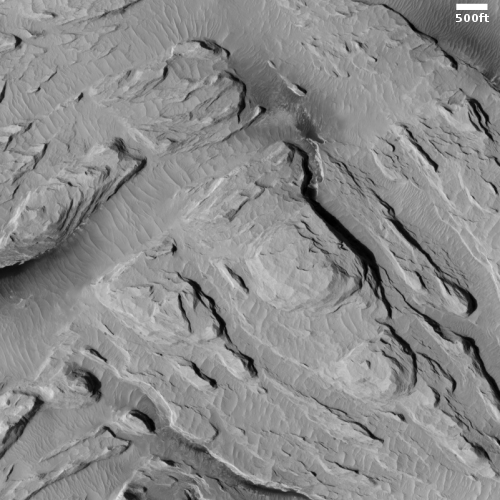 Today’s cool image provides I think a hint at the vast amount of time that has passed on Mars, allowing uncounted major events to occur which each lay down a bit of the geological history, a history that is now piled up on the surface so deeply that it will take decades of research to untangle it.

The photo to the right, cropped and reduced to post here, was taken on December 23, 2020 by the high resolution camera on Mars Reconnaissance Orbiter (MRO). It shows the layered nature of the Medusae Fossae Formation, the largest volcanic ash deposit on Mars (about the land area of India) and thought by some to be the source of most of the dust across the entire red planet.

The white cross marks the location of this photo in the overview map to the right. The white blobs are quakes detected by the InSight lander’s seismometer 1,100 miles to the west. The black dots in the blobs are the quakes’ epicenters.

At 3 degrees south latitude this is in Mars’ dry equatorial regions. What we see here is a thick covering of ash many feet deep that over eons has been shaped and eroded by wind. The wind has not only carved these mesas, it has revealed that the ash was laid down in many distinct layers, suggesting that each layer was a different volcanic event.

Mars was a very different place when these volcanoes were active. Moreover, that active period apparently lasted a very long time, probably exceeding a billion years. So long in fact that it is difficult for the human mind to grasp.