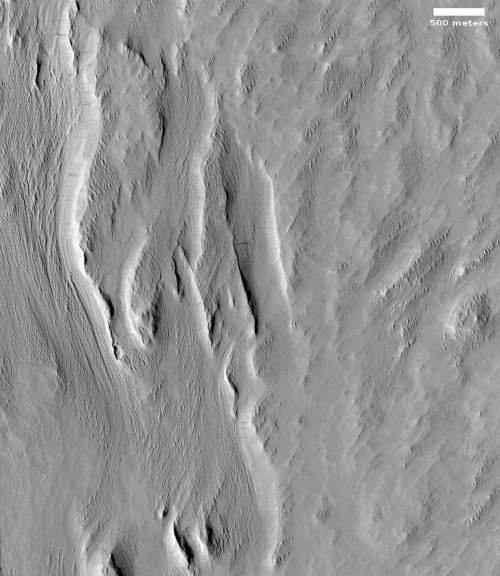 Of the numerous cool images I’ve posted on Mars, many have documented the growing evidence that in the mid-latitudes of the Red Planet are many buried glaciers of ice.

Today’s cool image to the right, rotated, cropped and reduced to post here, shows something that at first might resemble the features one would expect from an ice glacier, but in reality is actually a flow of volcanic ash being blown almost like a river, with the prevailing winds blowing from the south to the north.

The photo was taken by the high resolution camera on Mars Reconnaissance Orbiter (MRO) on November 1, 2020. The location, very close to the equator and in the transition zone dubbed the Cerberus Plains, is also smack dab between Mars’s biggest volcanoes, a region I like to dub Mars’s volcano country. The overview map below gives the context.

I’ve posted a number of similar images showing the wind-blown erosion of the Medusae Fossae Formation (see for example here and here). The features all have a similar appearance, reminiscent of the carved mesas of the American southwest, but much softer and more sculpted. It is my impression that this is a region of softly piled sand and dust, easily dug but difficult to build on because the ground is weakly structured and so easily eroded. Imagine the difficulties of building a home on a beach.

Scientists today believe that much of the dust we find on Mars comes from the Medusae. What they don’t yet know is when it was created, from what volcano or volcanoes, and in how many different eruptions. To answer those questions will require in situ observations, including a gathering of many samples that all can be dated.