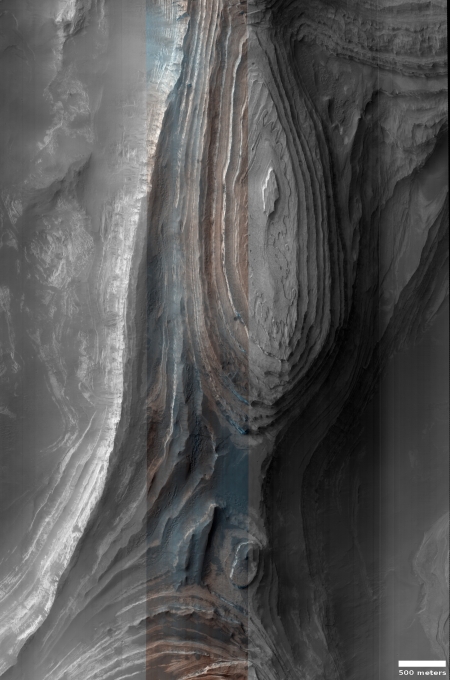 Cool image time! Or rather, a bunch of cool images! On February 17, 2020 the science team for the high resolution camera on Mars Reconnaissance Orbiter (MRO) released a very cool captioned photograph of a terraced mesa in a crater just north of Hellas Basin, shown in the image to the right, rotated, cropped, and reduced to post here.

The color strip down the center of this image illustrates how the colors of the different layers indicate the different make-up of each. These distinctions are not obvious in black & white. That array of colors also leads to some very beautiful scenery, as noted by planetary scientist Alfred McEwen in his caption:

Sedimentary layers record a history of Mars’ erosion and deposition by water and wind, and they make great landscapes for future interplanetary parks.

That this terraced mesa is located on the northern edge of Hellas Basin, the basement of Mars, is possibly not surprising. Other similarly terraced mesas like this have been found on the basin’s eastern edge, highlighted in my September 2019 post. The geology here appears to encourage this kind of erosion, where the different sedimentary bedrock layers erode away at different rates, leaving behind terraced mesas.

Terraced layers on Mars however come in other varieties, some of which build up over time instead of getting eroded away. 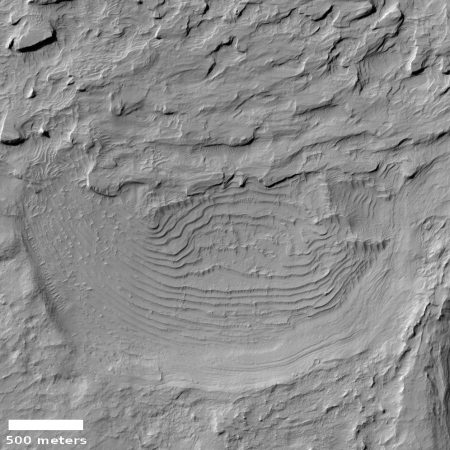 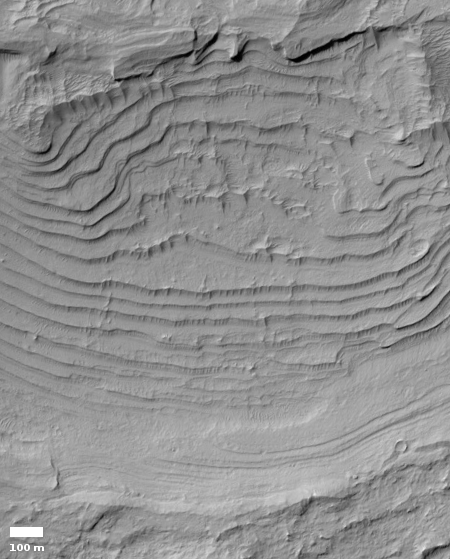 I found the image on the right, rotated, cropped, and reduced to post here, while doing my routine rummaging through the MRO image archive. It had been requested by planetary scientist Kevin Lewis of Johns Hopkins University and taken on December 6, 2019.

The first image to the right is a wide shot showing the strange crescent-shaped depression with layering that, from the north to the south, goes down hill in wide steps, then quickly uphill in short steps. The second image is a close-up at full resolution of those stepped layers.

Unlike the terraces in the first image above, these layers were built up as Mars’ climate went through its cycles of change due to the long term variations in the planet’s orbit. As Lewis explained to me in an email,

Our best guess for layers like these is that they are due to cyclic changes in Mars’ orbit (some combination of obliquity, precession of perihelion, and/or eccentricity). We have very little information about how Mars’ climate would change under various orbital configurations, but one can imagine that many climate parameters could change – frequency of dust storms, availability of water, atmospheric pressure, etc. All of these could cause cyclic responses in the dust deposition or cementation rate, which could lead to the layers currently expressed in these eroded outcrops.

“Obliquity” is what I normally refer to (probably somewhat inaccurately) as inclination, the tilt of the planet’s spin axis relative to its orbit. For Earth this tilt is presently 23 degrees. On Mars it is presently 25 degrees but can change to as much 60 degrees. These long term climate cycles could easily have laid down these layers, even if we do not yet understand any of the specifics.

One last but very interesting detail. The layers in the last two images above are found in a vast surface feature on Mars that scientists have dubbed the Medusae Fossae Formation. Covering a very large region south of and between the giant volcanoes Elysium Mons and Olympus Mons, as shown in the map to the right, it is thought to be made up of volcanic pyroclastic ash, material released quickly during a violent volcanic eruption such as the one that occurred at Mount St. Helens in 1980. According to Lewis,

In general, much of the [formation] seems to be in net erosion now, retaining very few craters on the surface. …One hypothesis is that this long term erosion, since it’s so enormous, is the primary source of the dust we see covering the much of the planet’s surface.

What strikes me is the gigantic nature of the eruptions required to lay down ash across such a wide area. I also wonder if the material came from both Elysium Mons and Olympus Mons, and if both had been erupting simultaneously. If so, Mars would then have been a very different place than the planet we see today.