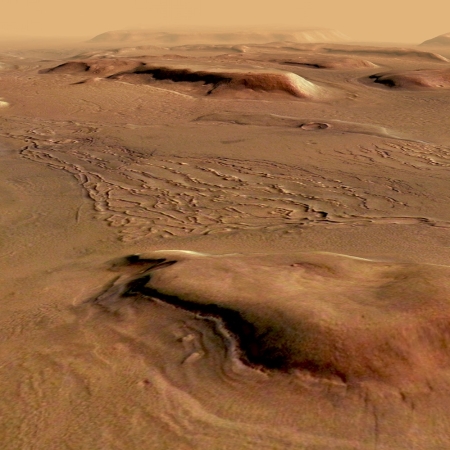 The European Space Agency’s orbiter Mars Express has confirmed the presence of large fractured ice sheets suggestive of buried and ancient glaciers. These ice sheets are within one region on Mars located in the mid-latitudes where many such glacial features have been found. They are also in the transition zone between the northern lowlands and the southern highlands.

This landscape shows clear and widespread signs of significant, lasting erosion. As is common with fretted terrain, it contains a mix of cliffs, canyons, scarps, steep-sided and flat-topped mounds (mesa), furrows, fractured ridges and more, a selection of which can be seen dotted across the frame.

These features were created as flowing material dissected the area, cutting through the existing landscape and carving out a web of winding channels. In the case of Deuteronilus Mensae, flowing ice is the most likely culprit. Scientists believe that this terrain has experienced extensive past glacial activity across numerous martian epochs.

It is thought that glaciers slowly but surely ate away at the plains and plateaus that once covered this region, leaving only a scattering of steep, flat, isolated mounds of rock in their wake.

Smooth deposits cover the floor itself, some marked with flow patterns from material slowly moving downhill – a mix of ice and accumulated debris that came together to form and feed viscous, moving flows of mass somewhat akin to a landslide or mudflow here on Earth.

Studies of this region by NASA’s Mars Reconnaissance Orbiter [MRO] have shown that most of the features seen here do indeed contain high levels of water ice. Estimates place the ice content of some glacial features in the region at up to 90%. This suggests that, rather than hosting individual or occasional icy pockets and glaciers, Deuteronilus Mensae may actually represent the remnants of an old regional ice sheet. This ice sheet may once have covered the entire area, lying atop the plateaus and plains. As the martian climate changed this ice began to shift around and disappear, slowly revealing the rock beneath.

Overall, the data coming from both Mars Express and MRO increasingly suggests that there is a lot of buried glacial ice in the mid-latitudes. Mars might be a desert, but it is increasingly beginning to look like much of the planet is a desert like Antarctica, not the Sahara.