Mars: On the floor of Valles Marineris
August 21, 2020 at 11:50 am Robert Zimmerman Points of Information

Cool image time! The image to the right, rotated and cropped to post here, was taken by the high resolution camera on Mars Reconnaissance Orbiter (MRO) on May 14, 2020, and shows a very strange bright outcrop on the floor of Valles Marineris, the largest canyon on both Mars and in the entire solar system.

MRO has photographed this spot a few times since 2007. The first image was posted with a detailed caption by Colin Dundas of the U.S. Geological Survey’s Astrogeology Science Center in Arizona, who described the feature like so:

Most of the material is light and shows many small scarps or benches. In places these appear to indicate boundaries between layers, but they are often discontinuous. The light material is buried by a thin mantle of dark material in places; the dark material is from other rock layers—possibly those above the outcrop—and has fallen or been blown over the light rock.

Near the top of the outcrop, there is a distinctive layer that appears as a dark band at low resolution. At the full resolution of HiRISE, this appears to be a layer breaking up into angular boulders, indicating different rock properties than the underlying light rock. There does appear to be some light material above this layer, suggesting that the process that deposited the light material continued for some time.

Dundas also added that the lighter material is theorized to have “formed by a variety of processes. Proposed deposition mechanisms for light-toned sediments on Mars include those from rivers or lakes, volcanic ash or wind-blown sand or dust.”

Since this lighter colored outcrop has remained as bright as it has now for more than six Martian years, I doubt it is brighter because of the surface deposit of ash, sand, or dust (though it might be made of these materials which have now become hardened). My guess is that the brightness is inherent to the outcrop. Moreover, note the plateau to the southwest. Its rim is cut sharply, suggesting erosion revealed this outcrop, and that the outcrop is made of more resistant material.

The overview map provides some context that also might help explain the geology at this location. 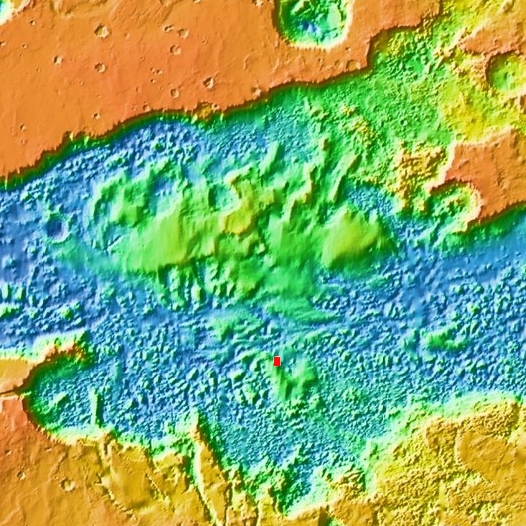 The red box indicates the location of today’s image. This particular part of Valles Marineris is called Eos Chasma, and is approximately the size of the entire northeast United States, from Pennsylvania to Maine. The chasm’s knobby floor is dubbed Eos Chaos because it appears to be a good example of chaos terrain, a region of many mesas formed as erosion cut and widened the cracks and faults between the mesas. In this place the erosion process has been going on a long time, so that the mesas are now mostly well-rounded knobs.

To my eye this outcrop seems to be made of material that is very resistant to this erosion process. In addition, it actually resembles a flow that had oozed northward before hardening. Its terraced look might be because of multiple oozes, producing many layers, but that is a complete guess, and made questionable because the layers “are often discontinuous,” as Dundas noted in his 2007 caption.

What caused the erosion? Until recently scientists had assumed, based on the visual evidence, that catastrophic floods of water had rushed though Valles Marineris, carving its features. This was then followed by eons of wind erosion. More recently scientists have begun to consider the possibility that Martian glaciers might have contributed, or been the major cause.

Either way, this erosion was unable to wash this outcrop away. Instead, it revealed it, providing us a hint of an earlier geological time, later obscured by material above it, and then exposed by more recent events.