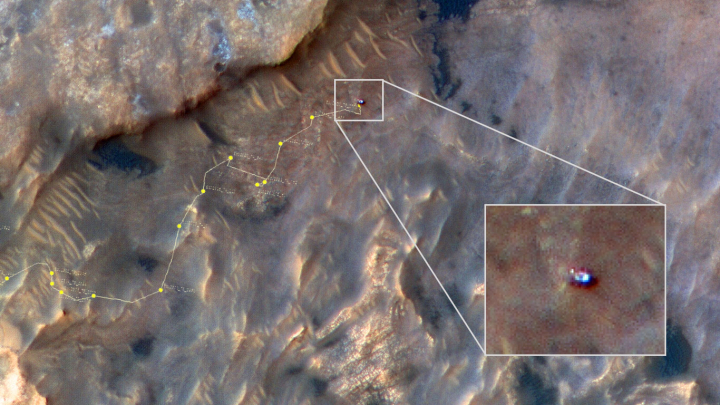 The Mars Reconnaissance Orbiter (MRO) science team today released an image taken on May 31, 2019 by the orbiter’s HiRISE high resolution camera of Curiosity when it was nestled against the cliff at the bottom of Vera Rubin Ridge.

The image above is that enhanced color image, reduced and annotated to post here. I have added the track of Curiosity’s route down from Vera Rubin Ridge leading up to the point where this picture was snapped.

In the image, Curiosity appears as a bluish speck. Vera Rubin Ridge cuts across the scene north of the rover, while a dark patch of sand lies to the northeast.

Look carefully at the inset image, and you can make out what it is likely Curiosity’s “head,” technically known as the remote sensing mast. A bright spot appears in the upper-left corner of the rover. At the time this image was acquired, the rover was facing 65 degrees counterclockwise from north, which would put the mast in about the right location to produce this bright spot.

Mirror-like reflections off smooth surfaces show up as especially bright spots in HiRISE images. For the camera to see these reflections on the rover, the Sun and MRO need to be in just the right locations. This enhanced-color image of Curiosity shows three or four distinct bright spots that are likely such reflections.

From this location Curiosity first continued along the cliff’s base to study that dark patch of sand to the northeast, then it turned almost due south in order to get back to its nominal route into Gediz Valles canyon, as shown in my May 30, 2019 rover update.