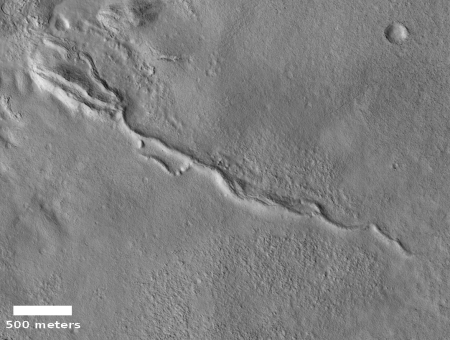 Cool image time! The photograph on the right, rotated, cropped, and reduced to post here, was taken by the high resolution camera on Mars Reconnaissance Orbiter (MRO) on September 30, 2019. It shows what the image title dubs a “sinuous ridge” in a region called Tempe Terra.

What caused it? At first glance the meandering nature of the ridge suggests it was originally a riverbed, formed by flowing water. Eventually the water dried up, and because that riverbed was made of harder material than the surrounding terrain, long term erosion caused that surrounding terrain to wear away, leaving a raised ridge where the river used to be. Scientists have found many such inverted channels on Mars. 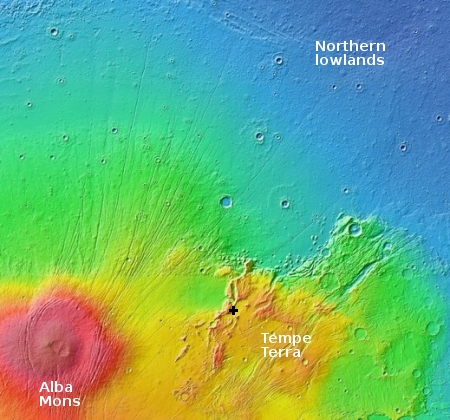 If we take a look at the general location of this feature, as indicated by the black cross on the overview map to the right, we find it is located on the farthest eastern flanks of Alba Mons, the volcano on Mars’ with the shallowest grade but covering the most territory. This overview image reveals the many fissures surrounding Alba Mons, caused generally by the volcano’s push upward. As it rose it caused cracks to widen along the generally north-south fault lines, the same faults that likely explain the location of the volcano here. Magma could more easily escape through these faults.

Thus, this sinuous ridge could very well have been formed by a lava flow, not water, within a wide fault or fissure. The lava, once frozen, would likely be more resistant to erosion, and would thus remain behind as a positive feature when the surrounding cliffs have worn away. 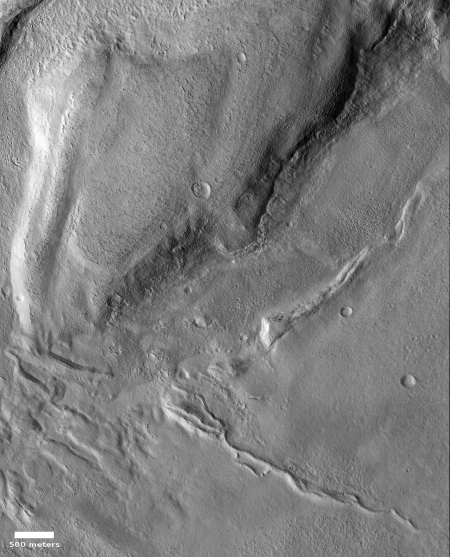 Not so fast! A wider view of the ridge, to the right, reveals some suggestive nearby features. Take a look at the humpy mesa to the north, as well as what looks like a wide but filled channel along its southeast wall, between the mesa and our sinuous ridge. These features have aspects that call to mind glaciers. Moreover, from the overview map we can see that Tempe Terra, though located at an elevation that matches Mars’ southern cratered highlands, is also located next to the transition zone down to the northern lowlands, a region where evidence of many such buried glaciers has been found. This particular ridge is right on the edge of that transition zone.

Thus, this ridge might have been formed during an earlier glacial period, when a glacier had been slowly flowing down a wide fault canyon. The glacier bed could have became hardened and more erosion resistant because of the weight of that glacier on it, allowing it to remain behind as the land around it was worn away.

Of these three hypotheses, I think the last is the least likely, and if I had to choose, I’d pick a volcanic origin. I would also recognize that we don’t really have enough information for a definitive conclusion, and would put little faith in any choice. 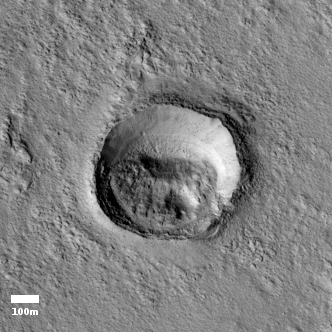 Finally, as a bonus, the full image also included the small crater shown to the right, at full resolution. What makes this crater puzzling is the stuff within it. My first guess is that the material is trapped dust and sand, blown into the crater by the wind but then trapped there because the thin Martian atmosphere is not sufficient to blow the material out.

The existence however of what appears to be a degraded smaller crater inside that pile of material suggests that if this is sand or dust, it over time had become hardened enough so that an impact could produce a sharp crater, rather than the kind of soft depressions you see in sand. Or maybe it isn’t sand but maybe buried ice?

Who knows? The mysteries in just this one MRO image illustrate the limitations of doing science from orbit. To really get these questions answered requires feet on the ground, with a geologist’s hammer, and the ability to take samples.