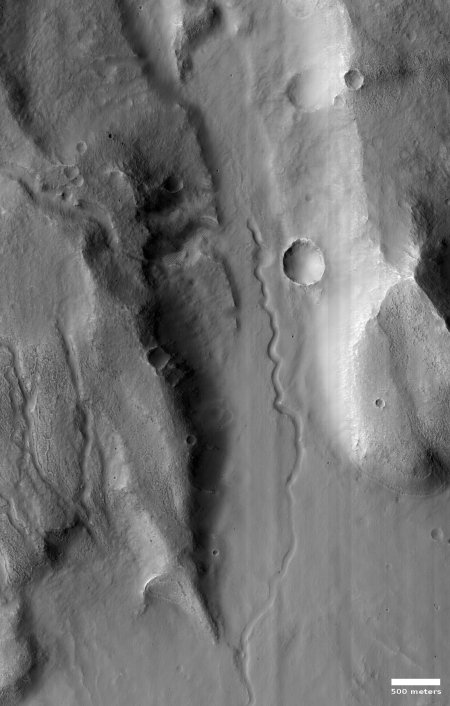 Whatever caused the meandering canyons on Mars, whether glaciers or liquid water, it was a process that was long-lived and multi-staged, as indicated by today’s cool image to the right, rotated, cropped, and reduced to post here. This photo, taken on June 28, 2020 by the high resolution camera on Mars Reconnaissance Orbiter (MRO), shows a large canyon cutting downward from a high ridgeline to the north. As that canyon begins to flow out out of the mountains and into the plains to the south, a secondary inner channel appears, meandering down the center of the larger canyon.

This canyon is located at 35 degrees south latitude, in the mid-latitude region where scientists have found evidence of a lot of glaciers. In fact, there are some hints of eroded glacial material in the small channels to the west of this main canyon. Also, there appear to be patches of corroding glacial ice on the south-facing slopes of the east and west hills that define the main channel. In the canyon itself however there appear to be few if any glacial-type features.

The overview map below gives the location context. 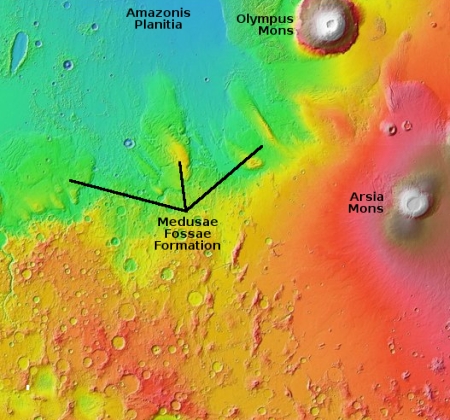 The small white rectangle in the lower left indicates this photo’s location. The Medusae Fossae Formation is the largest volcanic ash deposit on Mars, and is thought to be the source of much of the planet’s dust and sand.

Whether glaciers or flowing liquid water created this channel within a channel, it involved two stages. For the sake of discussion let’s assume glaciers carved this canyon. First they pushed downward, cutting the larger channel. Later as the ice began to erode and sublimate away, the larger glacier would begin to disappear, allowing the smaller channel to form in its center.

And if flowing water the inner channel had to also have been a later development, after the main flow had dissipated.

Personally, the more I learn of Mars the more skeptical I have become of the possibility of flowing water as the cause of the red planet’s many meandering channels. More and more they appear to me to be the result of slow-moving glaciers, that came and went many times as Mars went through numerous climate cycles over many millions of years. Each time they left their mark on the terrain, carving out these numerous canyons that we on Earth automatically assume must have formed by liquid river flows.

On Mars however the rivers were ice, and they had a lot of time to flow.