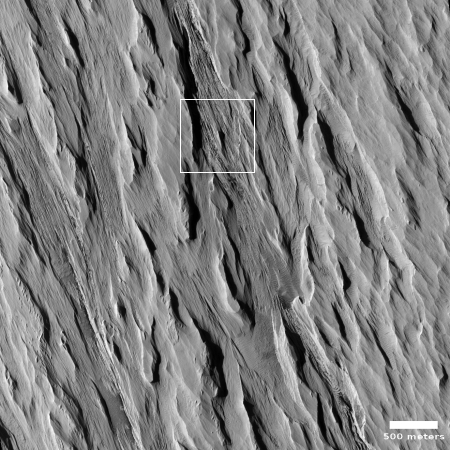 Cool image time! In the regions between the biggest volcanoes on Mars is the Medusae Fossae Formation, a immense deposit of volcanic ash that extends across as much surface area as the nation of India. As planetary scientist Kevin Lewis of Johns Hopkins University explained to me previously,

In general, much of the [formation] seems to be in net erosion now, retaining very few craters on the surface. …One hypothesis is that this long term erosion, since it’s so enormous, is the primary source of the dust we see covering the much of the planet’s surface.

The image above, cropped and reduced to post here, was taken by the high resolution camera on Mars Reconnaissance Orbiter (MRO) on January 25, 2020. It shows one very small area at the very edge of the Medusae ash deposit, in a region where that deposit is clearly being eroding away by the prevailing southeast-to-northwest winds. The mesas of this ash that remain are called yardangs, their ash more tightly pressed together so that it resists erosion a bit longer than the surrounding material.

In the context map below the location of these yardangs is indicated by the white cross, right on the edge of the Medusae ash field. 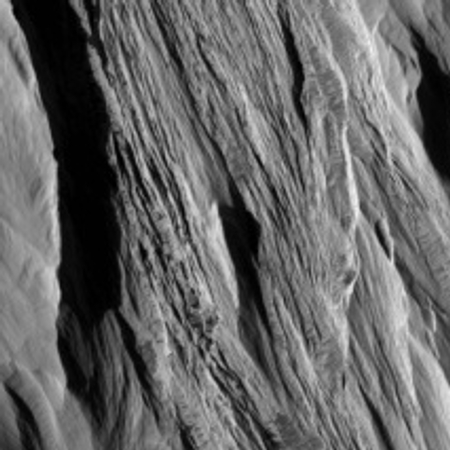 Other images taken by MRO along this edge, such as this one, show variations of the same type of erosion, though not as dramatic in scale or extent. A second high resolution MRO photo taken just to the north of the image above shows that this wind-blown mesa terrain continues for at least one to two miles northward.

To the right is a zoomed in close-up of the area in the white box. It shows why this image was dubbed “Exposed Layers in Medusae Fossae Formation.” The volcanic ash deposits apparently were not the result of one, or even ten volcanic eruptions, but many over a long period of time, each placing a new layer down that the wind is now exposing as it erodes the ash away.

That this vast ash deposit is made of many layers from many volcanic eruptions should not surprise us. The region is surrounded by gigantic volcanoes, the largest in the solar system. When they were active and growing, there must have been many violent repeated eruptions, spewing ash over large distances. The Medusae Fossae Formation is the remains of that volcanic era, now thought to have ended one to two billion years ago.