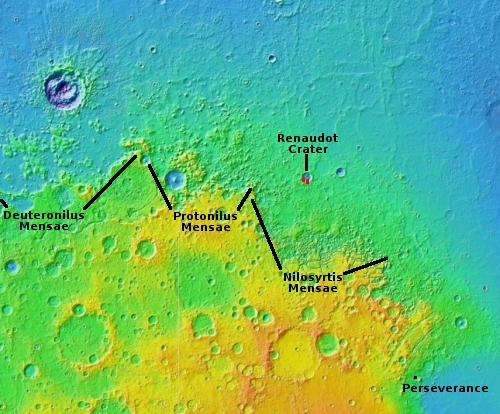 Cool image time! In the March 1st image release from the high resolution camera on Mars Reconnaissance Orbiter (MRO) were two pictures covering sections of the interior rim of 40-mile-wide Renaudot Crater, located in the northern lowland plains of Mars north of the region I dub Mars’ glacier country.

The map to the right provides the context. The two red boxes in Renaudot Crater show the location of the two images below, with the first being the one to the left. Located at about 42 degrees north latitude, we should expect to see evidence of ice and glacial features here, and that is exactly what both photos show. 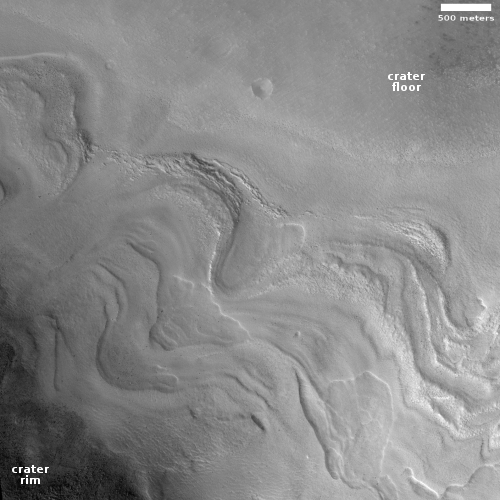 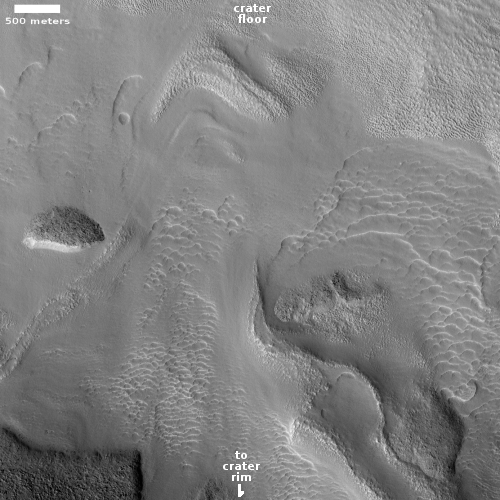 The first photo to the right, cropped and reduced to post here, was taken on January 28, 2021. It looks at the southwest quadrant of the crater’s interior rim, down to the crater floor, and shows several adjacent flows, each with terracing that suggests multiple periods of activity, with that activity growing less with time.

The second photo to the right, rotated, cropped, and reduced to post here, was taken on January 18, 2021. It covers the south rim down to the north and into the crater floor, and also shows a flow with similar terracing. The second image also shows what looks like depressions uphill from the flow, suggesting that this glacial feature is sublimating away.

Both photos suggest that the crater has ample ice buried within it. Both also show that these glaciers have gone through many cycles of activity and inactivity. Though scientists think that such glaciers today are inactive, this is not yet confirmed.

One curiosity in the first image is the fact that the glaciers come down off the rim in separate parallel flows. The three flows in the picture do not appear to be following any underlying topology. One would expect that they would flow down into the crater in a single line, similar to waves at a beach. They do not, for reasons that are not apparent. Instead, some sections seem to flow faster, while other sections are impeded.