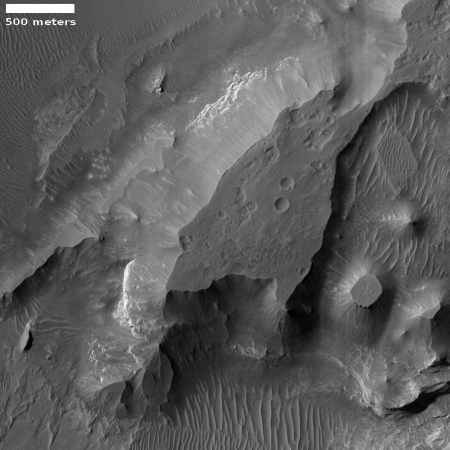 Cool image time! Rather than sit in cowering fear, as it appears too many worldwide are doing, I am going to stay calm and carry on. The photo to the right, rotated, cropped, and reduced in resolution to post here, was taken by the high resolution camera on Mars Reconnaissance Orbiter (MRO) on January 20, 2020. It shows a small section of a region dubbed Iani Chaos, a terrain dubbed such by scientists because of its cracked and chaotic nature, flat-topped mesas cut by canyons and fissures.

Chaos terrain is generally found in the transition zones on Mars between its southern highlands and northern lowlands. It was formed over time by erosion processes, either liquid water or ice, that slowly washed out the material along fault-lines, leaving mesas behind. This particular spot in Iani Chaos appears to be late in this process, with the gaps between the buttes wide and many of the mesas worn down into pointy knobs.

The location of Iani Chaos, as shown in the map below, tells us much about its history.

Sitting on the southwest edge of Arabia Terra, Mars’ largest transition zone between the southern highlands and northern lowlands, it also sits just to the east of the outflow from Marineris Valles, the biggest known canyon in the solar system. If that canyon was formed by catastrophic floods, as some scientists believe, then some of the overflow from those floods would have poured into Iani, helping to erode out its faults and fissures. Similarly, this region would have also gotten drainage down from Arabia Terra.

What struck me most however about this image were the flat-topped mesas pockmarked with ancient craters and accessible only with great difficulty. The cliffs are steep, and there is even a hint that the tops are overhung as well on all sides, especially with the roundish small butte just to the east of the largest plateau.

Imagine the rock-climbing experience here! Not only would the terrain be wild and alien, the one-third gravity would give you the ability to climb things impossible on Earth.