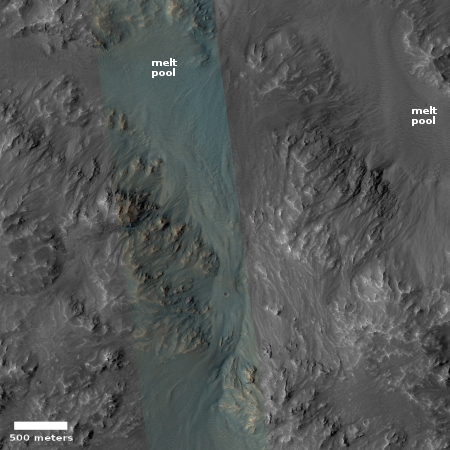 Cool image time! The image to the right, reduced, cropped, and annotated by me to post here, was part of the July image download from the high resolution camera on Mars Reconnaissance Orbiter (MRO) and was titled “Melt Pools around Mojave Crater”.

You can see that the flow began to the south, flowed northward (in the middle of the image), and then pooled in the two places as indicated. In the full photograph you can also see that the flow continued to the north, forming more pools.

The title to me suggests that this flow and the melt pools were lava, not ice. The low latitude, 7 degrees north, also suggests this is not ice. Though I was unable to reach the person who requested these images, it appears his research is aimed understanding the melt events that occur in the vicinity of craters upon impact. From his website:

Mechanisms for melt pool emplacement are not completely understood at present. They can be distinct to each terrestrial body and therefore an encompassing model for all bodies has been elusive. Because of Mars’ unique properties and location in the solar system, study of Martian melt pools can detail how influential impact velocity, impact angle, surface composition, topography, and atmosphere are to emplacement. For future study, the cool Martian temperatures can provide clues about emplacement on icy bodies.

In the case of these melt pools, their specific place on Mars is important. The white cross on the map on the right shows their location just to the southeast of the rim of Mohave Crater near the outlet from the vast Marinerins Valles canyon.

The crater itself is younger than Marineris Valles, since the impact clearly occurred after the catastrophic floods that formed these vast canyons and the intermittent ocean that is theorized to have filled these lowlands here and to the north. It also likely occurred well after most of the liquid was gone, as the crater is sharp and distinct, and does not appear to have been formed by a bolide pushing through deep water.

In fact, research about Mohave Crater suggests it is only three million years old, and might even be the source of many of the Mars meteorites that scientists have found on the Antarctic icecap.

What is intriguing about these flows however is their direction. Located to the southeast outside the crater, the flows however flow north toward the crater rim, flowing down from the large mesa to the south of Mohave. This suggests that the energy of the impact was enough to melt material on the cliffs of that mesa — about fifteen miles away — which then flowed downward to pool in the lowlands between the mesa and the crater.

Think about this. This relatively recent impact, long after the great bombardment in the early solar system, was powerful enough to melt rock more than a dozen miles away. Should something similar happen on Earth we would not be happy about it.

We do have one comforting thought: Mars’s location near the asteroid belt probably means it gets more frequent large impacts than Earth.