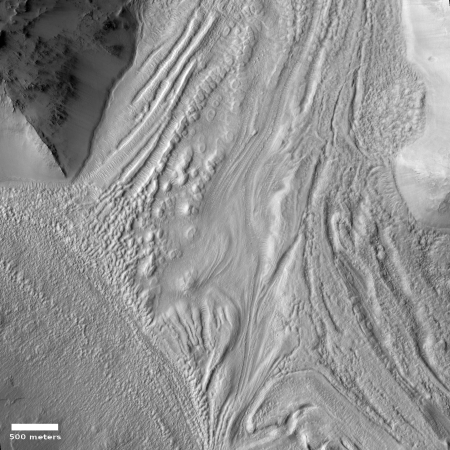 Cool image time! I have posted a lot of Mars photographs in the past few months showing possible glaciers in the mid-latitudes of Mars, where scientists think they have identified a lot of such features. Today is another, but unlike many of the previous examples, this particular feature more closely resembles a typical Earth glacier than almost any I have so far posted.

Based on the image’s title, “Lineated Valley Fill in Northern Mid-Latitudes,” given by the science team for the high resolution camera on Mars Reconnaissance Orbiter (MRO), I suspect that it remains unproven that these are features of buried glacial ice. Thus, they use a more vague descriptive term, lineated, to avoid pre-judging what these features are.

Nonetheless, a glacier is sure what this lineated valley fill looks like. See for example the Concordia confluence of two glaciers in the Karakoram Mountains of Pakistan, near the world’s second highest mountain, K2. Though obviously not the same, you can see many similarities between this Martian feature and Concordia.

MRO has taken only three photographs of this particular valley, with one image useless because it was taken during a dust storm. Yet, the other good image, farther downstream in this valley, shows very similar features.

The valley itself is formed from chaos terrain, located in the transition zone between the southern cratered highlands and the flat northern lowlands where a possible intermittent ocean might have once existed. Thus, for buried ice to be here is quite possible.