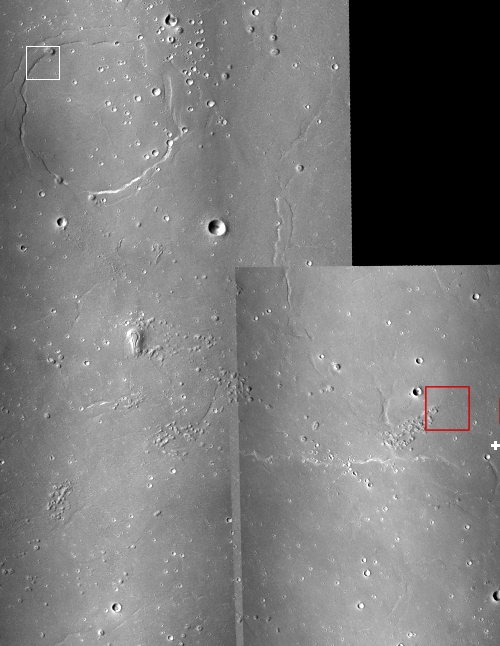 Cool image time! Though we still do not know exactly where the Chinese Mars rover Zhurong landed on Mars, we have a rough idea based on the latitude and longitude numbers leaked to the Chinese press in October 2020 and were apparently confirmed by photos taken by the Tianwen-1 orbiter soon after reaching Mars. We also know Zhurong’s engineers wanted to land in the northern lowland plains dubbed Utopia Planitia, a region that is relatively flat and thus makes a safe landing spot for their first attempt to reach the surface of Mars.

The mosaic to the right, rotated and reduced to post here, is made from three context camera images taken by Mars Reconnaissance Orbiter (MRO). The white cross on the right edge is essentially Zhurong’s leaked landing spot. The red box indicates the area covered by one of only two photos that China has released that were taken by its Tianwen-1 orbiter.

The white box in the upper left shows the area covered by today’s cool image, shown below. 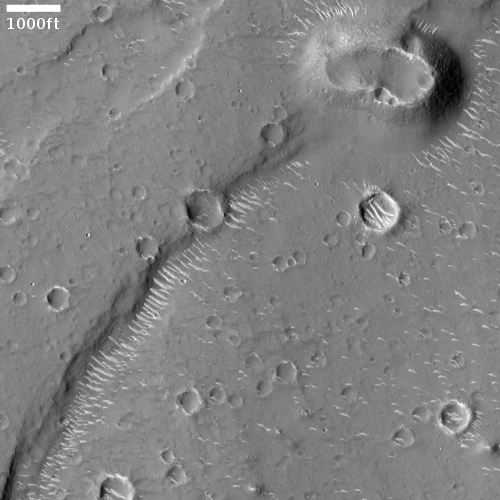 The photo was taken on April 29, 2021 by MRO’s high resolution camera and is rotated, cropped, and reduced to post here. It was also taken only a few weeks prior to Zhurong’s successful landing. Requested by planetary scientist Alfred McEwen of the Lunar & Planetary Laboratory in Arizona, its goal was to take a close look at part of that strange circular feature visible in the mosaic above that lies about 24 miles to the northwest of Zhurong’s landing spot. As McEwen explained, this area of Utopia Planitia…

…may be the location of really voluminous eruption of muddy sediments, perhaps the remnants of an ancient ocean. Or maybe it was lava. The pitted cones are a key feature, and two of them formed right over the ringed graben (tectonic downdrop). It is generally thought that the ringed structures are from differential compaction or settling of muddy sediments or lava over an impact crater.

In other words, the ringed structure formed when the the interior floor dropped downward to create a circular cliff. The shape and location of the drop took place above a buried crater and was shaped by it. What buried the crater is as yet undetermined, though it is thought that was was either lava or mud flows.

The most interesting feature to McEwen are the pitted cones, one of which is in the high-res image above. It formed over the cliff, suggesting that when the ground shifted down it created a fissure where material below could push upward to form this mini-volcano. As McEwen notes, what that material was remains unknown. Molten lava is one possibility. So is mud.

There are many such pitted cones found in this region of Utopia Planitia. McEwen is especially hopeful that Zhurong can reach one and determine whether they are lava or mud volcanoes. He admits however that it is “probably too far away for the rover to reach it.”

Maybe. We don’t yet know Zhurong’s exact landing spot. It could have touched down very close to this spot. Or not. Moreover, though it only has a 90 day mission, if it functions well there is no reason it could not last longer and travel far more than 1,300 feet.

I am certain the MRO science team will be taking images in an effort to locate Zhurong, since we cannot depend on China’s secretive government to tell us. Once we know however we will be able to pinpoint its most likely geological targets, as well as identify features in any images the Chinese eventually release.

Hopefully these features will be one of those targets, as figuring out how they formed will help explain a lot about the geological history of this northern lowland plain, including whether there ever was an intermittent ocean here.