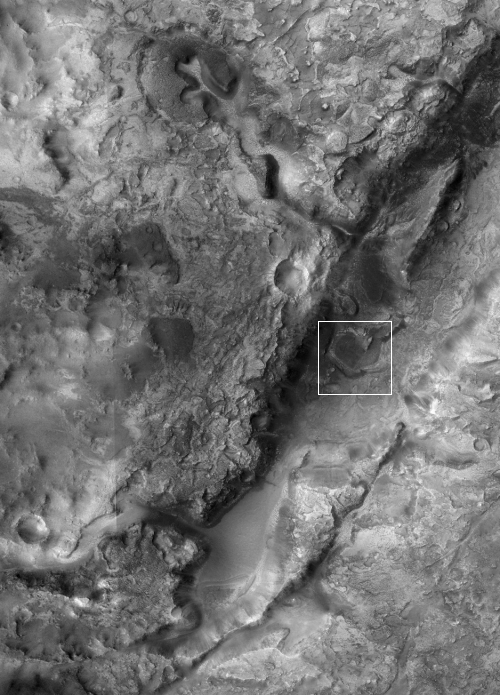 Today’s cool image might very well be giving us a glimpse of one of the most promising regions on Mars for future mining. The photo to the right, rotated, cropped, and reduced, is made up of two context camera images from Mars Reconnaissance Orbiter (MRO), found here and here. I chose to begin with this wider context camera mosaic because this is one of the rare times the context camera is more exciting an image than the close-up high resolution photo.

This photo covers the southern end of the one of the two curved fissures dubbed Nili Fossae and are thought to be left over evidence of the giant impact that created Isidis Basin to the southeast. These two fissures are about 300 miles long, and can be as much as 1,600 feet deep in places. At this southern end, we can see what look like at least two different drainage channels feeding into the fissure.

The overview map below provides the context of this location on Mars, including its relationship to Jezero Crater where Perseverance now sits. 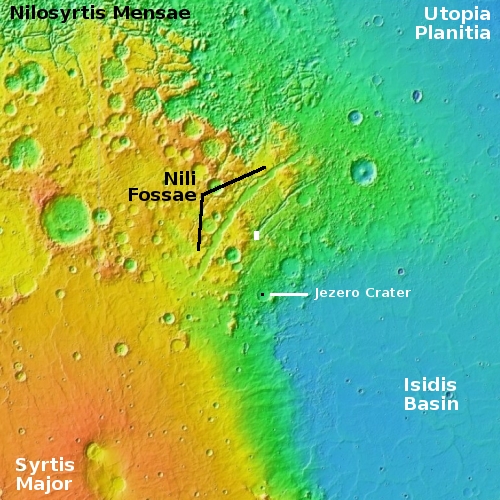 The white rectangle marks the location of the mosaic above. The tiny black dot in Jezero crater marks the location of Perseverance at this moment. Syrtis Major is a large shield volcano while Nilosyrtis Mensae is a the easternmost portion of the region I label Mars’ glacier country because it appears there are a lot of glaciers flowing off its many mesas and out of its many canyons.

Nili Fossae, like Jezero Crater, is south of the 30 degree latitude that marks the end of glacier country. Both are too far south to show signs of any present ice. However, both show ample evidence that water or ice was once here, and helped shape the terrain, as indicated by those two drainage channels in the mosaic above. 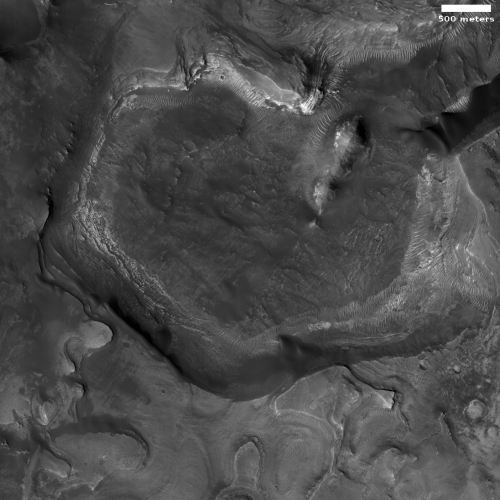 What makes Nili Fossae however especially interesting to planetary scientists — as well as future Martian colonists — is its complex mineralogy. The picture to the right, rotated, cropped, and reduced to post here, was what first prompted my interest in this region. It was taken on November 1, 2020 by MRO’s high resolution camera, and shows the area marked by the white box in the mosaic above. The wide range of bright and dark materials as well as the strange curved channel struck me as most interesting. When I contacted Kim Seelos, science operations lead for that camera and the scientist who requested this image, she explained that she had done so merely “to fill in a gap in [the camera’s] coverage.” She didn’t pick it randomly, however, as the geology from other instruments had been found to be quite complex and required further investigation. To give me a larger understanding of this work she directed me to this paper about that complex mineralogy. From its abstract:

[W]e detail the basis for identification of iron and magnesium smectites (including both nontronite and more Mg‐rich varieties), chlorite, prehnite, serpentine, kaolinite, potassium mica (illite or muscovite), hydrated (opaline) silica, the sodium zeolite analcime, and magnesium carbonate. The detection of serpentine and analcime on Mars is reported here for the first time. … We find that the distribution of alteration minerals is not homogeneous; rather, they occur in provinces with distinctive assemblages of alteration minerals.

In plain English, their research found a wide range of minerals, valuable in themselves but also likely indicative of further materials not yet identified that will also be valuable to future settlers.

The data also suggests that water was a major component in the formation of these minerals. Determining how that happened however still remains the major geological question on Mars, as flowing liquid water in its thin cold atmosphere is not possible, and scientists have been unable to create a satisfactory model to allow that in the past.

The curved channel in the close-up image likely marks the flow pattern from the channel coming down on the west wall just above. That channel begins in a crater that has been filled by debris and was later the source of the flow, dropped into the fissure to curve around and then flow downhill to the northeast.

Liquid water could have carved out this channel, but so could have glacial ice. Or maybe a combination.

Regardless, the wide variety of minerals already located in Nili Fossae marks this as a place that future settlers are going to want to visit very early in their explorations. Not only may it contain valuable materials needed by them, it is relatively close to the glacier country to the northwest, where there is a lot of very accessible ice.