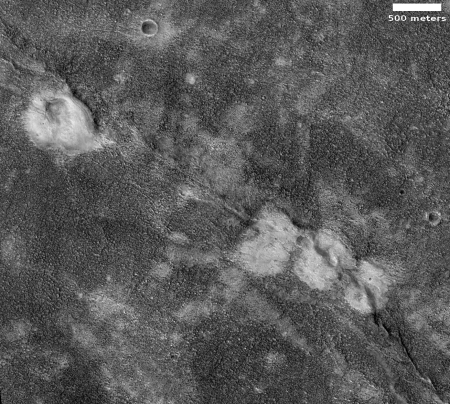 In a captioned image release last week from the science team of the high resolution camera on Mars Reconnaissance Orbiter (MRO), planetary scientist Alfred McEwen describes a string of mounds aligned and deformed by a fissue.

The image, cropped and reduced to post here, is to the right. As McEwen notes,

A possible geologic interpretation is that as the rift began to open, subsurface material (perhaps mud) erupted to create the mounds, which were then deformed as the rift continued to spread.

Located in Chryse Planitia, the region of the northern lowland plains just north of the outlet from Valles Marineris, these mounds and their probable geological origin seem very similar to the pimple mounds I highlighted in a cool image only last week. The only difference is that the earlier posted pimples were not aligned with any obvious fissure or rift.