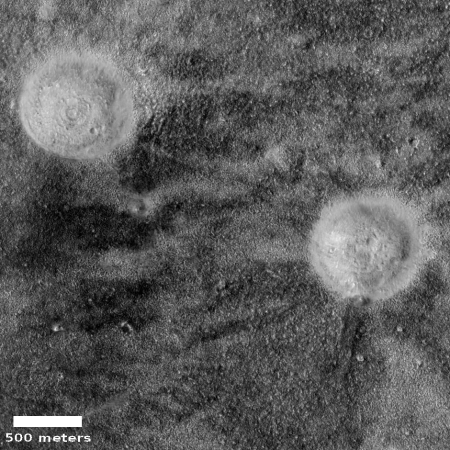 Cool image time! The image to the right, cropped and reduced to post here, is one of those terrain sample images the science team of the high resolution camera of Mars Reconnaissance Orbiter (MRO) takes periodically when they have a gap in their observation schedule with no specific requests for images of the terrain below. Still, they need to use the camera regularly to keep its temperature maintained, so they then take a somewhat random picture over that terrain, based partly on information from lower resolution images but without a strong sense of what they will find.

In this case, they found what I dub pimples, raised mounds with small holes at their peaks. The image, taken on November 30, 2019, is located is in the northern lowlands, at a latitude (45 degrees) where subsurface ice is possible. Thus, we could be looking at water ice volcanoes.

Very few high resolution images have been taken of this area, with no others close by. Thus, the overall context of these mounds is hard to gauge. They could be widespread, or very localized.

The unknowns here and general lack of research suggests this location and these mounds are ripe research for some postdoc student interested in planetary geology.