Though scientists have found some evidence of slow erosion and change on the Martian surface, it is today generally inactive. While the weak wind of Mars’ thin atmosphere continues to work its will, and the likely presence of underground frozen water acts to shift the surface shape as the seasons come and go, none of this happens quickly.

Essentially, Mars is a quiet place.

Once however catastrophic events took place, gigantic floods flowing down to the east from the planet’s huge volcanoes to carve out Marineris Valles, the solar system’s largest known canyon. As that water rushed eastward it ripped the terrain apart quickly, creating deep side canyons, drainage valleys, and chopped up regions now dubbed as chaos terrain, multiple mesas separated by numerous fissure-like canyons.

The overview map on the right shows Valles Marineris and its drainage to the east and north into the vast northern plains of Mars. It also shows the location of one of the largest regions on Mars of chaos terrain, dubbed Hydraotes Chaos, located close to the mouth of this gigantic drainage system more than 2,500 miles long. 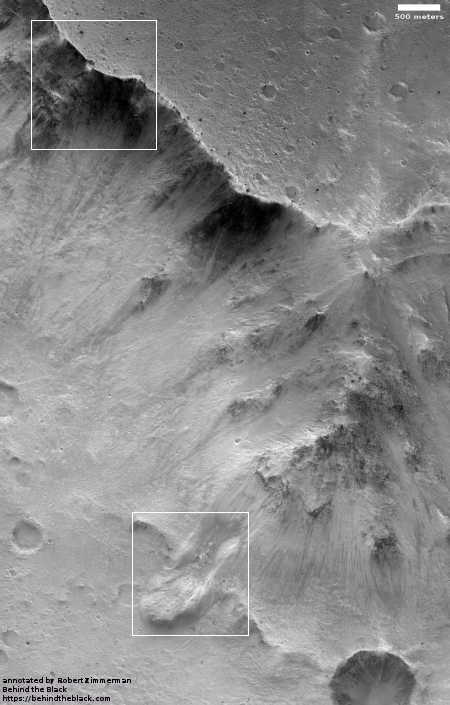 Recently scientists have used the high resolution camera on Mars Reconnaissance Orbiter (MRO) to begin taking images of the massive landslides on the face of the mesa north of Hydraotes Chaos that was hit directly by these floods. The location of the most immediately interesting of these landslide images is also indicated on this overview image.

To the right is that image, rotated, cropped, reduced, and annotated to post here. The white boxes indicate two full resolution sections that I highlight below at full resolution.

This image shows that full cliff. The total drop from the plateau at the top to the floor where Hydraotes Chaos is located to the south is approximately 8,200 feet, almost exactly comparable to the depth of the north rim of the Grand Canyon.

The image shows numerous evidence of avalanches and erosion, both at its base and at its rim. None of these avalanches likely occurred during those catastrophic floods, but long afterward. 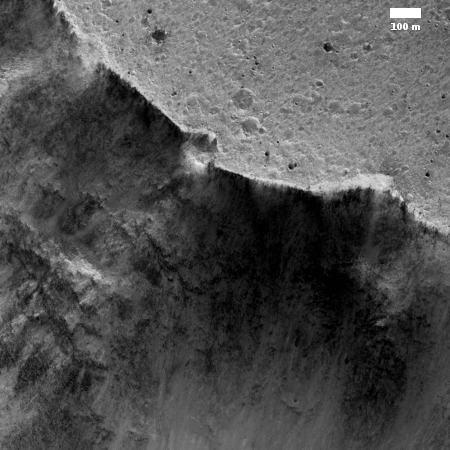 The top inset is shown to the left. Here very large sections of the the cliff face at the rim have broken off, dropping giant blocks downward. This material piles up to create an alluvial slope heading down to the floor of the canyon. On the upper cliff and on this slope the dark streaks indicate both past landslides as well as possible seeps of water coming out of the cliff face. 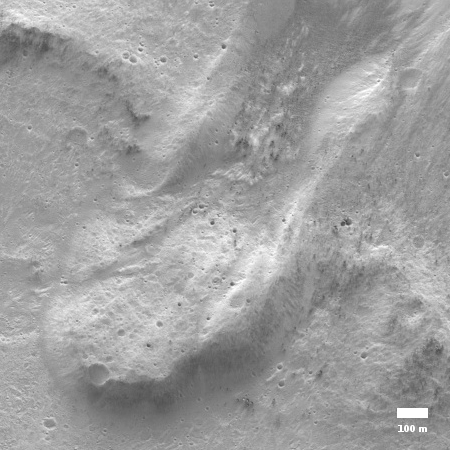 The bottom inset is shown next to the left. It focuses on the head of the largest landslide, and shows a flow at its base that resembles a gravitational collapse as shown in this science paper about Martian ground water.

What probably happens is as the upper material piles up, it breaks down into smaller and smaller material, while also mixing with the water seeping out of the cliff. Eventually this gives way again, but now does so as a gravitational collapse more closely resembling a mud flow than a landslide of rocks.

The entire history of this mesa and cliff face however is probably even more complicated. During the catastrophic floods the mesa probably extended a considerable distance south into Hydraotes Chaos. It might even been part of Hydraotes Chaos, with the flood waters flowing around it to both the east and west. As the water pounded into this mesa it eroded it away, so that its southern face retreated northward, leaving behind the chaotic terrain of Hydraotes Chaos.

Eventually the floods subsided and the terrain dried up. The cliff face, while no longer pounded by rushing floodwaters, still slowly eroded away, as indicated by the landslides captured by this MRO image, continuing that slow retreat northward.

If there is available water coming out of that cliff face, this would be a spectacular place to live. It would be like living inside a canyon larger than the Grand Canyon.