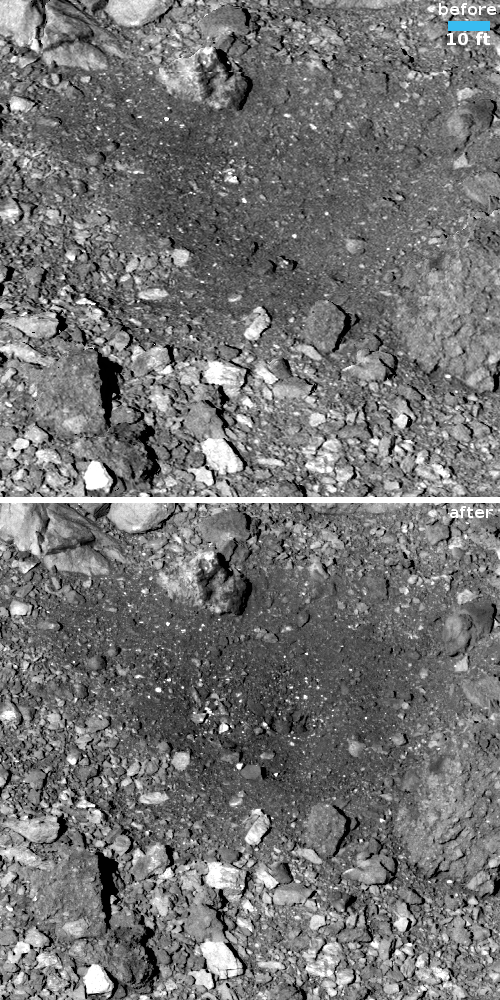 The OSIRIS-REx science team today released the photos the spacecraft obtained in its last fly-by of the asteroid Bennu on April 7th of the Nightngale sample site, showing how it changed after the sample grab in October 2020.

The two photos to the right compare that site, with the top image taken before the sample grab and the bottom image taken on April 7th.

Comparing the two images reveals obvious signs of surface disturbance. At the sample collection point, there appears to be a depression, with several large boulders evident at the bottom, suggesting that they were exposed by sampling. There is a noticeable increase in the amount of highly reflective material near the TAG [touch-and-go] point against the generally dark background of the surface, and many rocks were moved around.

Where thrusters fired against the surface, substantial mass movement is apparent. Multiple sub-meter boulders were mobilized by the plumes into a campfire ring–like shape — similar to rings of boulders seen around small craters pocking the surface.

Jason Dworkin, the mission’s project scientist at NASA’s Goddard Space Flight Center in Greenbelt, Maryland, noticed that one boulder measuring 4 feet (1.25 meters) across on the edge of the sampling site seemed to appear only in the post-TAG image. “The rock probably weighs around a ton, with a mass somewhere between a cow and a car.”

Dante Lauretta, of the University of Arizona and the mission’s principal investigator, later pointed out that this boulder is likely one of those present in the pre-TAG image, but much nearer the sampling location, and estimates it was thrown a distance of 40 feet (about 12 meters) by the sample collection event.

The sample grab arm penetrated the surface by more than a foot, and that event is marked by that dark depression at the center of the site.

OSIRIS-REX will now prepare for its May 10th engine firing that will send it on its route back to Earth to return that sample in September 24, 2023. After that the spacecraft could be sent on another mission, this time to the potentially dangerous asteroid Apophis.