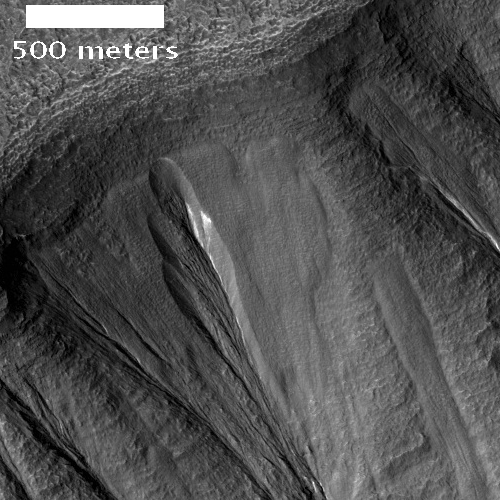 In a paper just published, scientists are proposing that bright areas seen in the low mid-latitude gullies on Mars are the underground ice table newly exposed as surface dust is removed.

This paper is a reiteration in more detail of a previous presentation [pdf] by these same scientists at the 2019 the 50th Lunar and Planetary Science Conference in Texas and reported here in March 2019.

The image to the right, from the paper, was taken by the high resolution camera of Mars Reconnaissance Orbiter (MRO) in 2009, and has been cropped to post here. The white streaks are what the scientists propose is that exposed underground ice table. At 32.9 south latitude, this particular gully would be the closest to the equator that such an ice layer has been identified. All the previous ice layer discoveries have been in the ice scarps found at latitudes above 50 degrees. As the paper’s lead author, Aditya Khuller at Arizona State University, explained in to me in an email, “We believe we are seeing exposures of dusty ice that likely originated as dusty snow.” From their paper:

The layer would have likely been laid down as snow during a time period (a long time ago) when the rotational tilt of Mars, its obliquity, was much higher than today’s 25 degrees. At that time the mid-latitudes were colder than the poles, and water was sublimating from the polar ice caps to fall as snow in the mid-latitudes.

The overview map below reveals some additional intriguing possibilities. 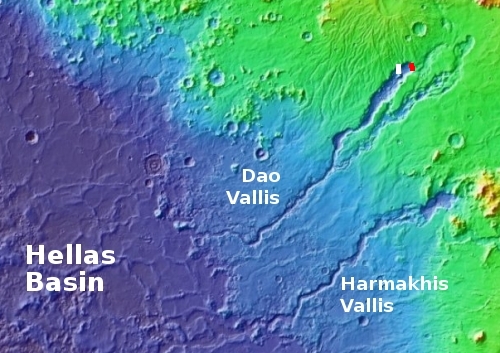 The white rectangle indicates the location of this particular gully. It is only about 25 miles from the abrupt end of Dao Vallis, suggesting that the ice/water that once flowed through Dao and carved it might have come out of this very ice layer at the canyon’s head.

This December 7, 2018 photo by MRO’s high resolution camera takes a look at the head of this canyon and the gullies found on its slope (its location is indicated by the red rectangle on the overview map). While there is no obvious evidence of the same bright patches and thus an ice layer, the slope wall is filled with similar gullies, all presumably formed by the same process. As the ice layer was exposed in the summer, a bit was sublimated or melted away, causing the gully to form and for the cliff to retreat slightly.

Given enough time and that retreat could form the canyon.

At this time however this is merely a hypothesis. As Khuller explained,

I have personally not seen other exposed ice at the end of Dao, but Dao does have a similar mantling layer present on much of its pole-facing walls, which are also likely to contain similar dusty ice. We are in the process of documenting more such exposures within other mid-latitude gullies.

As I noted in my March 2019 post describing this research,

As always, I think like a colonist on Mars. These cliffs now appear to me as prime real estate, places to look for easily accessible water on Mars. That they are near Hellas Basin increases their value, as the low elevation of this basin means it will have a thicker atmosphere which will ease colonization. If we can find some caves in this region, we might then have all the ingredients for building that first Martian colony.

Ironically, no one has sent or is even planning to send a rover or lander to the southern hemisphere of Mars. All research has presently been confined to either the northern lowland plains, or to the transition zone between those lowlands and the southern cratered highlands, which generally sits in the northern hemisphere or near the equator, as shown by the global map of Mars below: 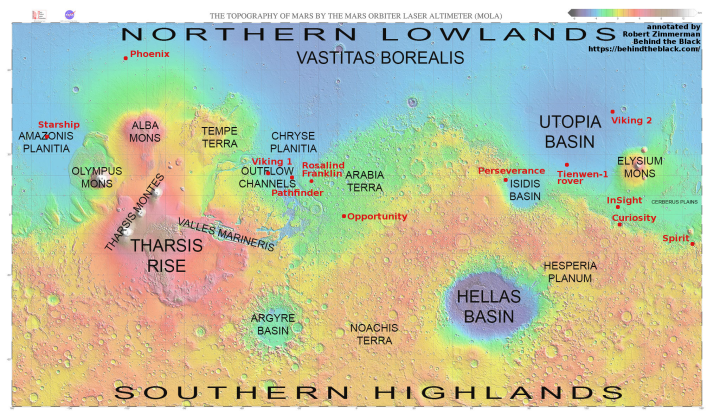 If I was thinking of exploring or colonizing Mars, however, the head of Dao canyon — on the northeastern border of Hellas Basin and at only about 30 degrees south latitude — appears to be prime real estate, and certainly deserves a closer look. Who wants to go?