The Icy Surface of Mars 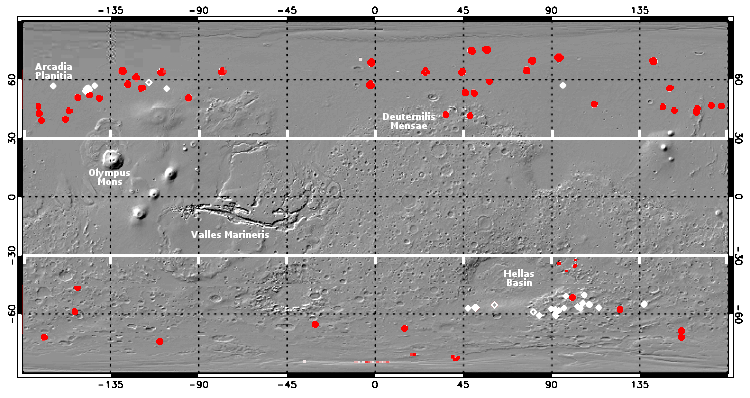 Two newly published science papers in the past few days have once again reinforced the growing evidence that much of Mars from 30 degrees latitude to its poles is very icy, with much of that ice found close to the surface.

The map above, adapted and annotated by me from figures 4 and 12 of one of those papers (“Widespread Exposures of Extensive Clean Shallow Ice in the Mid‐Latitudes of Mars”), show the areas on Mars where the evidence suggests ample and easily accessible ice, underground but close to the surface.

The two hatched lines at 30 degrees latitude, north and south, indicate the closest to the equator that scientists have detected evidence of glacial ice. It is also the closest to the equator that the second new paper, “Water Ice Resources Identified in Martian Northern Hemisphere “, has found evidence of underground ice in the north. From the abstract of this second paper:

Concentrating our efforts across the majority of the northern hemisphere, our composite ice-consistency maps indicate that the broad plains of Arcadia and the extensive glacial networks across Deuteronilus Mensae match the greatest number of remote-sensing criteria for accessible ice-rich, subsurface material situated equatorwards of the contemporary ice-stability zone.

Deuteronilius Mensae is part of the region I call Mars’ glacier country, with its glacial features repeatedly shown in cool images from the high resolution camera on Mars Reconnaissance Orbiter (MRO). Also part of this glacial region to its east are the mensae regions dubbed Protonilus and Nilosyrtis, both of which are also just north of 30 degrees latitude. All three mensae regions are chaos terrain located on the transition zone between the southern cratered highlands and the northern lowland plains.

Arcadia Planitia is the northern lowland plains that SpaceX has chosen as its candidate landing zone for its Starship spaceship.

The papers released this week also confirm the ice mapping done by other researchers and released in December 2019. All conclude that above 30 degrees latitude there will be ample underground ice, which will become increasingly accessible and widespread as you move poleward.

The studies all seem to suggest that the glacial bands from 30 to 60 degree latitudes mark the edge of the region where Martian ice can exist. According to Colin Dundas of the U.S. Geological Survey’s Astrogeology Science Center in Arizona and a co-writer on the first paper,

It’s not surprising that ice is widespread in the northern mid-latitudes, but these observations help us pin down the boundary, and in the future could help us to understand how much of this ice is out of equilibrium and actively sublimating.

North of these bands the underground ice on Mars is stable. Within these bands is the region where, depending on Mars climate in recent eons, glaciers will either grow or shrink. 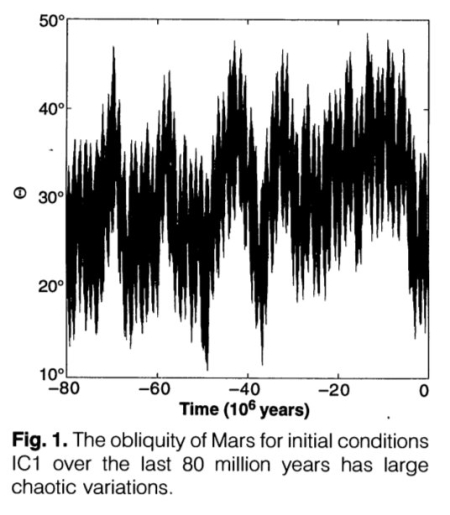 The graph to the right was taken from
this paper [pdf], and shows the shift of Mars’ rotational tilt, or obliquity, for the past 80 million years.

Mars’ obliquity is presently 25 degrees, only slightly different than Earth’s 23 degrees. Though it is thought the glaciers and ice caps are presently in a steady-state, neither growing nor shrinking, this is not yet confirmed. Moreover, we do not know the tilt required for that steady state to shift from one direction to the other. Knowing these facts will go a long way to not only explaining the long term history of Mars’ geology and climate, it will also help explain the surface topography we see today.

Determining the exact extent of Mars’ underground ice will help answer these questions. And it appears that scientists are beginning to get their first good approximation.

For future explorers, this data is even more important. While it is better to land near the Martian equator, because the climate will be less varied and warmer, future colonists also have to land near water. Based on what we presently know, those first colonies will have to be at least 30 degrees from the equator. Knowing this helps shape the engineering required to make these first settlements habitable.

One last point. Except for the Phoenix lander in 2008, all of the landers and rovers that humans have placed on Mars have landed in that central dry equatorial region. The two new rovers arriving on Mars in only a few days, Perseverance and China’s as-yet-unnamed rover, will both land in the northern hemisphere but also south of 30 degrees latitude. Perseverance will land in Jezero Crater at about 18 degrees north. China’s rover will land in May in Utopia Planitia to the west of Jezero, at about 25 degrees north.

So, do not expect either to discover water, though China’s rover and lander will have radar equipment specifically designed to detect evidence of underground ice, should it exist reasonably close to the surface. If it does detect ice, this will be an important discovery, the closest to the equator yet that ice will have been found on Mars.