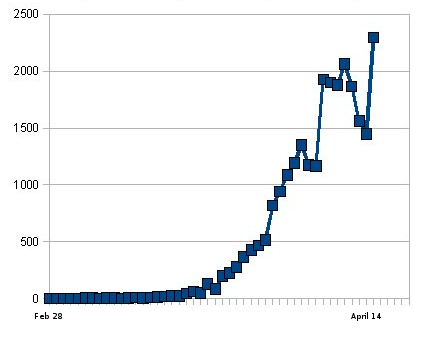 Yesterday the nationwide death toll from the Wuhan virus suddenly jumped after several days of decline. The graph on the right, created using the numbers at this link, illustrates this. Until yesterday it clearly looked as if the epidemic was finally subsiding, and that the peak had occurred as expected several days ago.

Why the jump? Well it turns out the reason is because government officials in New York decided to add thousands of recent deaths to their total, based on no evidence of coronavirus, at all.

The city decided to add 3,700 people to its death tolls, who they “presumed” to have died from the virus, according to a report from The New York Times. The additions increased the death toll in the U.S. by 17%, according to the Times report, and included people who were suffering from symptoms of the virus, such as intense coughing and a fever.

The Times stated: “A limited number of tests have been available, and until now, only deaths where a person had tested positive were counted among those killed by the virus in New York.”

The report stated that Democratic New York City Mayor Bill de Blasio decided over the weekend to change the way the city is counting deaths.

In other words, de Blasio is falsely inflating the numbers. And I can guess why. The drop during the past few days indicated that this manufactured crisis was beginning to end. That cannot be tolerated, as these government officials are still in the process of cementing their totalitarian control over their citizens. More time is needed! Let’s balloon the totals to magnify the crisis beyond reality!

The symptoms described could easily apply just as much to the flu. Moreover, just because someone has a cough or fever does not mean this is what killed them. They don’t say, but I bet some of those individuals clearly died from other causes.

This is fraud and corruption at its worst.