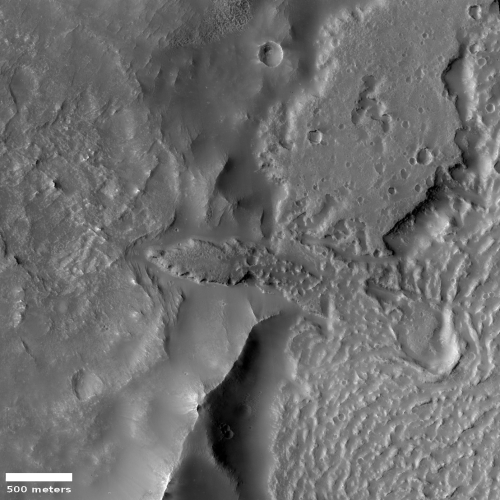 Cool image time! The photo to the right, cropped and reduced to post here, was taken on September 30, 2020 by the high resolution camera on Mars Reconnaissance Orbiter (MRO). Uncaptioned, it shows what the science team labels “Flows and pitted material in Terra Sirenum.”

Downhill is to the southeast, which means the pitted material forms some sort of filled terrain, with the surface eroded similarly everywhere. At a latitude of 32 degrees south, these flows could conceivably be glacial features. Are they?

A wider look might help answer that question. Below is a photo taken by MRO’s context camera, cropped and reduced to post here. 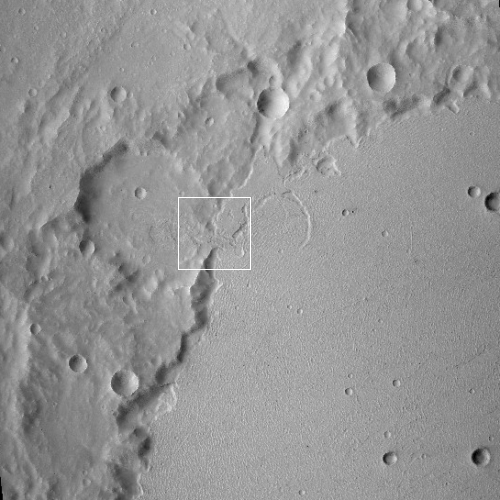 The white box indicates the area covered by the first image above.

It appears that this flow feeds into a very vast sea of pitted material, which extends far beyond even this image (as can be seen by this adjacent context camera photo).

Is it possible this sea is all glacial? It seems unlikely. At this latitude any glacial features seen are never as pervasive or widespread as this. By 30 degrees latitude Mars appears to be drying out, and the glacial features are beginning to fade. In fact, scientists have seen almost no such features closer to the equator.

Furthermore, look at the craters both in this sea and outside it. They look somewhat the same, as if they were impacts in solid bedrock. Impacts on icy ground look far different, almost like splats. 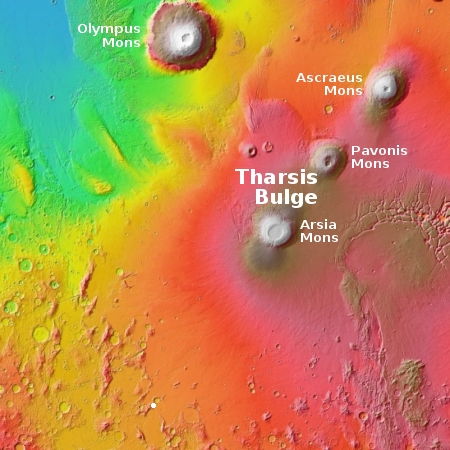 So, what are we looking at?

The wide overview map to the right might provide an answer. The white cross near the bottom center is the location of today’s image. It is apparently located at the very edge of the vast shield produced by the volcanoes that form what scientists have dubbed the Tharsis bulge on Mars.

In other words, this sea is likely a lava plain, and this particular spot is its shoreline. Instead of the flow going downhill into the sea, what we are looking at is a flow pushing into a break in the rim of the crater on the ridge. This interpretation also helps explain the nature of the flow in that crater. It seems to stop suddenly, as if the flow froze suddenly. Its nature seems to fit frozen lava better than frozen water.

While there still could be ice and glaciers scattered through this terrain, they do not appear to be the dominant feature. At least, that’s my guess. What’s yours?