Crater in the Martian northern lowlands
December 24, 2019 at 11:32 am Robert Zimmerman Points of Information 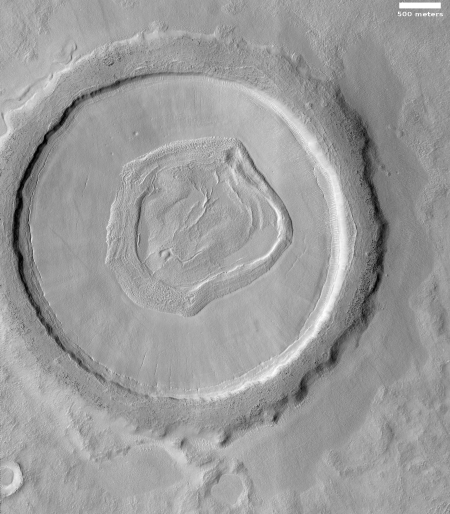 Cool image time! The photo to the right, rotated, cropped, and reduced to post here, was taken by the high resolution camera on Mars Reconnaissance Orbiter (MRO) on October 26, 2019. It shows a crater in the western edge of Utopia Planitia, the largest and deepest region of the Martian northern lowlands where it is theorized that an intermittent ocean might have once existed.

My first uneducated guess at looking at this image is that the impact occurred in some sort of wet slushy mud or ice, which then melted and filled the crater interior, ponding in the crater’s center as it froze.

A more educated guess, based on what I have learned in the past year, is not much different. The crater is located at 40 degrees north latitude and therefore sits in the middle of the mid-latitude band where scientists think there are a lot of buried inactive glaciers.

The map to the right, revised from my December 20, 2019 post about glaciers flowing off the slopes of a mid-latitude mesa, illustrates this even more clearly.

This crater, indicated by the white cross, sits at approximately the same latitude as that mesa and its glaciers in Protonilus Mensae. It also sits at in an area where accumulated data from several spacecraft have mapped a lot of water ice, close to the surface.

Thus, it is reasonable to suppose that the impact that made this crater pushed into that ice-table, melting the water which subsequently froze and then subsided downward into the ground to form the crater’s central ponded features.

Or to put it as I did initially, the impact smashed into some wet slushy mud/ice, melting it so that it filled the crater interior to then freeze as we see it.