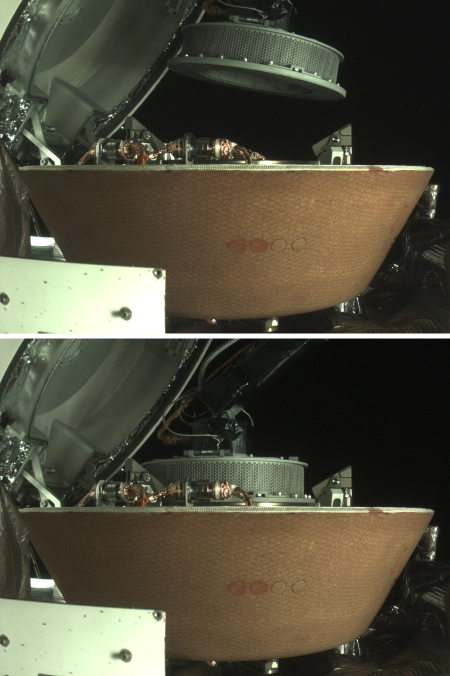 OSIRIS-REx engineers have successfully placed the sample collector head holding the material captured from the asteroid Bennu in the return capsule that will bring it back to Earth.

Today, after the head was seated into the SRC’s capture ring, the spacecraft performed a “backout check,” which commanded the TAGSAM arm to back out of the capsule. This maneuver is designed to tug on the collector head and ensure that the latches – which keep the collector head in place – are well secured. Following the test, the mission team received telemetry confirming that the head is properly secured in the SRC.

The next step will be to seal the capsule for return to Earth. However, based on the two images above, the sample is now relatively secure, as the opening where material could escape is now held face down in the capsule.

The spacecraft will head back to Earth in March ’21, with the sample capsule landing on Earth on September 24, 2023. I do not know whether it will be possible in the next six months to get new images of the Nightingale touch-and-go site, but have emailed Erin Morton, head of the communications for the science team, and asked. I will update this post when I hear back from her.