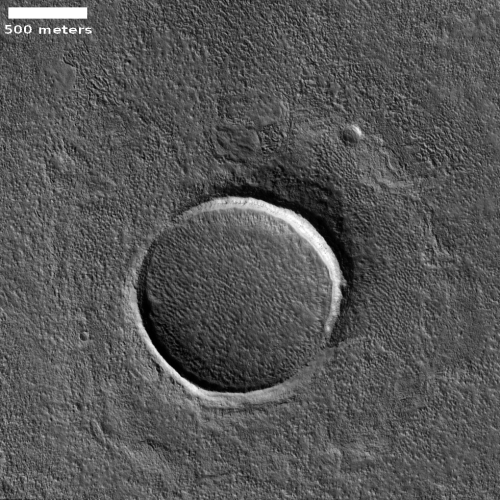 Cool image time! The photo to the right, rotated, cropped, and reduced to post here, was taken by the high resolution camera on Mars Reconnaissance Orbiter (MRO) on October 31, 2020. It shows a crater that appears buried in a sea of material so that pretty much the only thing visible is top of its rim.

The full image shows a second larger crater to the northwest that looks the same. In both cases the material fills the craters also fills the surrounding terrain.

Yet, both craters appear to be surrounded by a faint skirt of uplifted material.

What caused this situation? 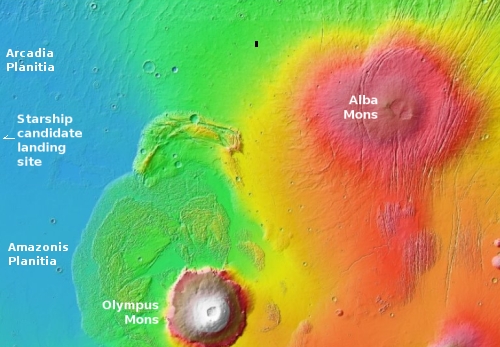 The overview map to the right gives a clue. The crater, the black rectangle, is on the outermost slopes of the giant shield volcano Alba Mons. Rather than grow upward significantly, this volcano, which is relatively low for its width, spread outward over a vast region. Even though the above crater is about 600 miles from the volcano’s caldera, it is still within its vast shield.

Also, if you look closely at this crater as well as the larger one in the full image, you will see that both have breaks in their rims in the southeast and northwest quadrants, exactly in line with the direction of flow down from the volcano.

So is the material that surrounds and fills this crater lava from Alba Mons? Probably, but with a major caveat. The crater is located at 46 degrees north latitude, well within the mid-latitude bands where scientists have found lots of evidence of glacial features. Furthermore, the Starship candidate landing zone in Arcadia Planitia is only slightly off the west edge of this overview map, about 900 miles away, where scientists have found evidence of water ice very close to the surface almost everywhere they look.

Thus, we might also be looking at buried ice features here, likely sitting on top of the lava flows that are much older.

As for the skirts surrounding each crater, I suspect we are seeing a reflection of the underground ejecta blanket from the impacts, which likely hit ground with a lot of water ice, and thus produced a splattered look like the crater posted here. Later, lava covered everything, leaving only a hint of that splat.

Then again, none of my hypotheses above might be right. It is also possible that the craters could have been volcanic vents, and the lava came from within them. That would explain the skirts. I think this less likely, but what do I know?