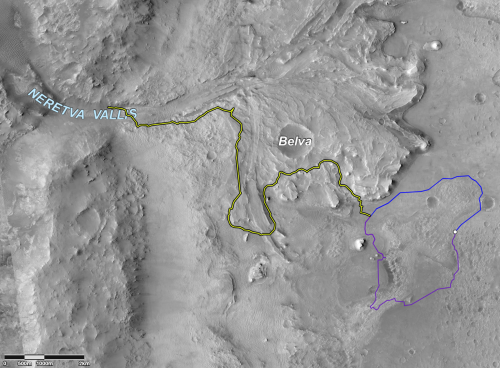 Perseverance has six aluminum wheels, each with titanium spokes for support, and a suspension capable of traveling over rocks as big as the wheels themselves. The one-ton rover is based on the design of NASA’s Curiosity rover, which landed on Mars in 2012, but with some improvements.

The wheels on Perseverance are sightly narrower, have a larger diameter, and are made of thicker materials, Zarifian said. Engineers also changed the tread pattern on the wheels to reduce the risk of damage from sharp rocks, which created dings and cuts in Curiosity’s wheels.

The map above shows the route the science team has presently chosen for Perseverance, a revision from earlier routes created prior to landing. The white dot on the right is the rover’s present position, the blue and purple lines are two alternative routes they are considering for their route to the delta coming out of Neretva Vallis. The yellow route up the delta is especially exciting in that it gets them onto it much sooner than previous plans.

Which route they choose for the initial journey I think will partly depend on which provides the best location to test fly Ingenuity, the experimental helicopter on the rover. Scientists and engineers I am sure are presently poring over high resolution images from Mars Reconnaissance Orbiter (MRO) in order to make that choice. At this link, centered on Perseverance’s present location, you can take a look at all those images by MRO by selecting the arrow icon at the top and then clicking on any red box. Because so many photos have been taken there is a lot of overlap, so each click will give you many pictures to look at.