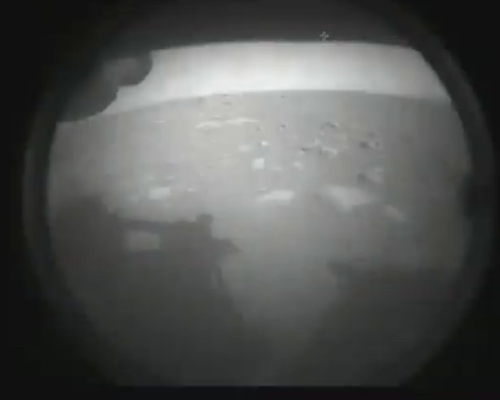 The rover Perseverance has successfully landed in Jezero Crater on Mars.

The picture to the right is a screen capture of everyone cheering in the control room on hearing the good news.

The second image is the first image beamed back, from the rover’s hazard camera used mostly for guiding it in future travels. The haze is from the dust kicked up during landing.

The engineering narrator indicated that they also know exactly where the rover landed, and it is a good location, but NASA’s live stream appears uninterested in telling us this critical information. Right now they are spending time blathering on with more NASA propaganda.

I should get this information during the post-landing press conference, which begins at 5:30 (Eastern).

UPDATE: The press conference started 30 minutes late, and then spent the first 25 minutes letting the top NASA managers claim credit for everything. Then we finally got to hear from actual mission managers to tell us where the rover landed and what should happen next. 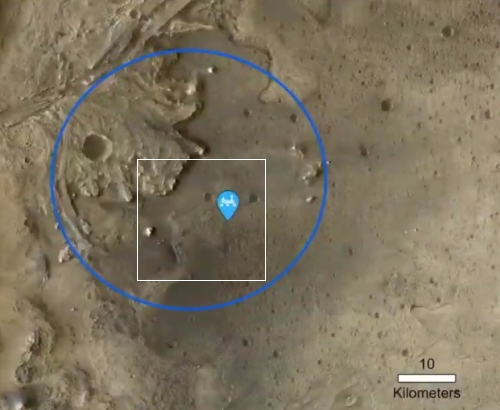 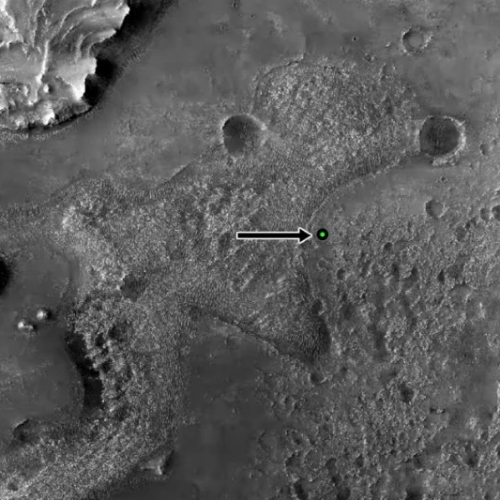 The two images to the right show us where Perseverance landed in its landing ellipse relative to the giant delta in the northwest quadrant that sometime in the far past poured through a break in the crater rim. According to the science team, the rover is about 2 kilometers from that delta.

The white box in the first photo marks the area covered in the second closer orbital image. The vehicle’s avoidance system nicely found a flat spot between several rough areas that are dune fields.

The landing site is just to the east and not far from the primarily planned route, as shown in yellow in the map posted here earlier today.

They will spend the next few days deploying the spacecraft’s instruments and then testing them. Hopefully all survived the landing with no damage. Then they will spend a period of time assessing the geology of the landing site itself, then work themselves around the dune field to head for the delta. The likely route will be to head to the northeast first, then due west skirting the dune field’s north and then west borders.

The access route up onto the delta is a long ramp on the southwest of the delta.