Pushback: Total victory for The Federalist against attempt by Biden’s Labor Board to silence it
May 24, 2022 12:16 pm Robert Zimmerman 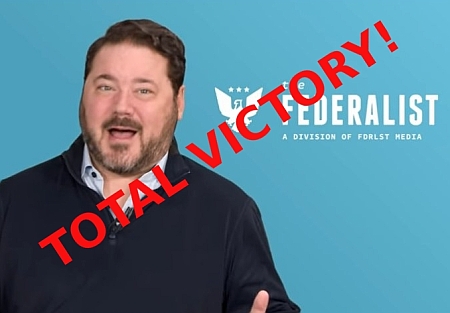 Ben Domenech at The Federalist

Another past blacklisted American has come away with a triumph for freedom! In April 2022 I reported how the National Labor Relations Board (NRLB) under the Biden administration and working with two leftist lawyers was attempting to silence the conservative news outlet The Federalist because of a very lame Twitter joke sent out by its publisher, Ben Domenech.

In his tweet, Domenech had joked that if any of his six employees dared considering unionizing “I swear I’ll send you back to the salt mine.” The NRLB claimed absurdly this was an example of “unfair labor practice.”

Domenech had hired the New Civil Liberties Alliance (NCLA) to defend him. At first it worked out a settlement whereby all charges would be dropped if Domenech would simply delete his tweet.

Domenech refused. As he said in explaining this decision to fight:

The NLRB erroneously interpreted its own governing statute to mean anyone can press unsubstantiated charges to silence a company’s opposing beliefs. NLRB has no authority to prosecute particular viewpoints and label them as a violation of the law. Individuals have the right to speak freely and satirically to express their opinions under the First Amendment of the U.S. Constitution. And yes, even government agencies have to abide by that … It’s understandable that those who can’t afford to fight often bend the knee, but in that America, bureaucrats—and the trolls who weaponize them to silence speech they don’t like—will keep on rolling until someone stands up and says ‘no.’

On May 20, 2022 the U.S. Court of Appeals ruled entirely in favor of Domenech and The Federalist. You can read that ruling here [pdf].

Significantly, this Court has never affirmed a finding of an unfair labor practice based on employer speech alone absent any indicia of labor friction. And in this case, the Board [NRLB] points to no history of labor strife, no evidence of antagonism, nor even a single example of labor-management tension. The Board cited only one brief tweet, posted from a supervisor’s personal Twitter account. The record contains no sign—indeed, no inkling—of any circumstance at [The Federalist] that leads us to conclude that a reasonable employee would interpret Domenech’s tweet as a veiled threat.

The court also noted that only six people work at The Federalist, and none of them were bothered by Domenech’s tweet at all, with two providing affidavits in support of Domenech. The only ones to complain were two outside leftist lawyers looking to twist the law to censor speech they didn’t like, with the Biden administration and its labor board quite willing to help them do it.

The victory is only one small battle in a much larger war. The same thugs still run both the labor board as well as the Biden administration. The same leftist lawyers who brought the charges are still around, quite eager to weaponize the law to blackball their political opponents.

Until all of these goons are neutralized politically, we shall see more examples of this bad behavior. I wonder if Domenech or The Federalist are considering suing them. They should.