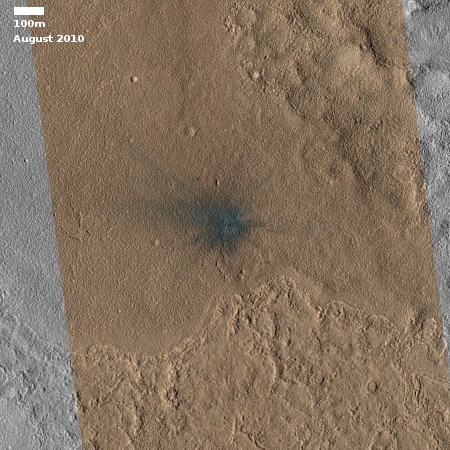 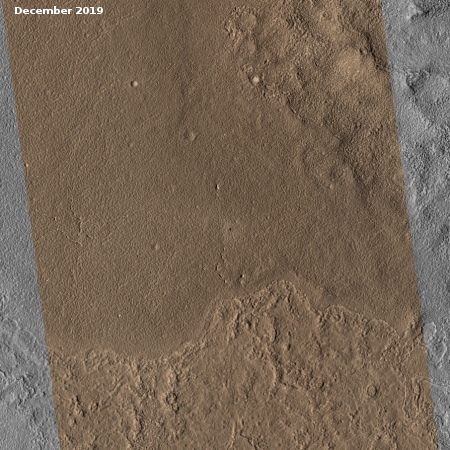 Cool image time! Though it seems that no one is really interested in anything but the Wuhan virus and the attempt by our corrupt politicians to use it to gain power, I think that life requires more from us than politics and panic. Thus, I am going to keep posting pure science and cool images.

The two photos to the right were taken by the high resolution camera on Mars Reconnaissance Orbiter (MRO) almost ten years apart. They were both posted as captioned images, the first in 2010, the second on March 19, 2020 to illustrate the remarkable fading of a fresh impact’s dark ejecta, in only about four Martian years.

The March 19, 2020 captioned image included an animation to illustrate the change. I prefer putting the two images side-by-side. Either way, the change is striking. As planetary scientist Alfred McEwen noted in his caption, “the dark material has faded into the background, while the new 6.3-meter diameter crater persists.”

Wind and dust storms probably acted to wipe out the dark material, but the process did not take that long, and last year’s global dust storm was not a major factor, since much of the dark material was already gone in this July 2012 image.

The crater itself is located in Arcadia Planitia, just west of the Erebus Mountains, the very region in the northern lowlands that SpaceX has made its primary candidate landing site for its Starship rocket, partly because the terrain is flat which makes landing easy, and partly because there is amply evidence that these lowlands have lots of ice just below the surface. And the full image for the 2019 photo reinforces this conclusion. Much of the rougher ground south of the impact appears to be the partially sublimated surface of an ice block.

So, while this region will provide an easy smooth landing site and plenty of water for the first human arrivals, those humans will also have to contend with a planet without a thick atmosphere to protect them from most meteorites. Rare as these events are, they happen more often because of Mars’ location closer to the asteroid belt, and they hit the surface far more frequently.