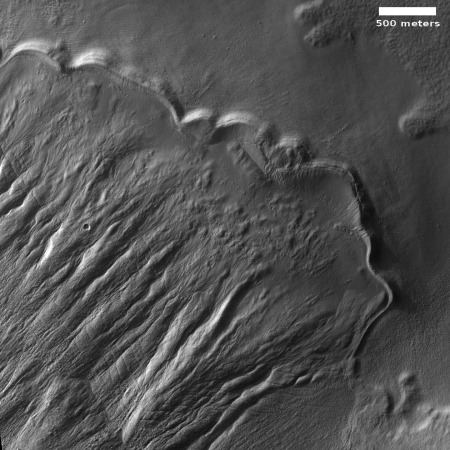 Cool image time! Using both Martian orbiters and rovers scientists are increasingly convinced that Mars has lots of buried glaciers in its mid-latitudes. These glaciers are presently either inactive or shrinking, their water ice sublimating away as gas, either escaping into space or transporting to the colder poles.

The image to the right, cropped and reduced to post here, shows some apparent proof of this process. Taken by the high resolution camera of Mars Reconnaissance Orbiter (MRO) on December 23, 2019, it shows a weird meandering ridge crossing the floor of a crater. The north and south parts of the crater rim are just beyond the cropped image, so that the gullied slope in the image’s lower left is actually a slope coming down from that rim.

My first reaction upon seeing this image was how much that ridge reminded me of the strange rimstone dams you often find on cave floors, formed when calcite in the water condenses out at the edge of the pond and begins to build up a dam over time.

This Martian ridge was certainly not formed by this process. To get a more accurate explanation, I contacted Dan Berman, senior scientist at the Planetary Science Institute in Arizona, who had requested this image. He explained:

The ridge in the image is of glacial origin. The glacier once flowed from the hill to the lower left of the image (flow to the upper right), and most of the ice has since sublimated away, and the surface is now covered by gullies and their apron deposits. Parts of the ridge may represent the furthest margin of the glacier and may still contain ice. The layering seen in the ridge could indicate that it formed over a series of depositional cycles, when ice and dust fell atmospherically, likely during periods of high Martian obliquity. Parts of the ridge may be moraine like features, where the glacier pushed material as it flowed.

His reference to “high Martian obliquity” has to do with the large changes to Mars’ inclination that occur repeatedly over time. Right now the planet has a tilt similar to the Earth, 25 degrees. In the past that tilt was as much as 60 degrees, during which the mid-latitudes where this crater is located (43 degrees south) were actually colder than the poles. Then, water was cycling from the poles to the mid-latitudes where it fell as snow, causing these glaciers to flow and push their moraines before them.

At today’s 25 degrees inclination, the glaciers at the mid-latitudes are either inactive, or sublimating away. This is what happened here, exposing the underlying gullies that had been carved out by the moving glacier and its melting water. The moraine, made of rocks and dirt pushed down by the glacier, formed the ridge at the foot of the glacier, and remains there after the glacier has largely disappeared. 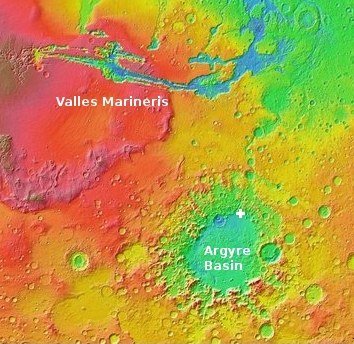 The location of this crater is also interesting, as it sits at the northern margin of Argyre Basin, the second largest basin on Mars that was probably caused by a major impact event. The overview map to the right gives a sense of its location on Mars, in the southern cratered highlands south of Valles Marineris.

Though Argyre Basin is more than a thousand miles across with a depth greater than three miles, for no understandable reason none of my previous cool images have been located in it. This image ends that drought.

Just for fun, I might do a survey of old MRO high resolution images in Argyre. I am sure there are other very cool images there that I have missed.