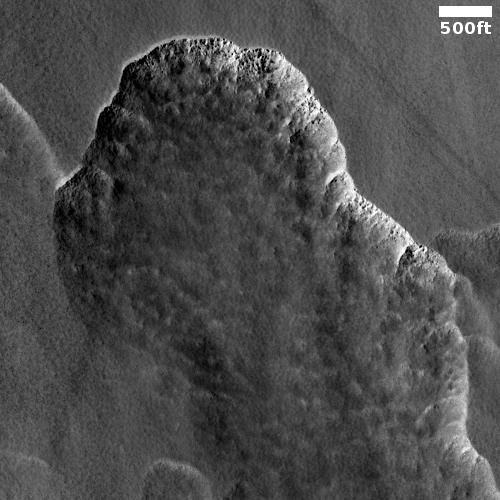 Cool image time! The photo to the right, cropped to post here, was yesterday’s captioned image from the MRO science team. From the caption, written by Shane Byrne of the Lunar and Planetary Lab University of Arizona,

About a third of Mars has water ice just below the dusty surface. Figuring out exactly where is vital for future human explorers. One of the ways scientists do this is to look for landforms that only occur when this buried ice is present. These scallops are one of those diagnostic landforms.

A layer of clean ice lies just below the surface in this image. As the ice ablates away in some spots the surface dust collapses into the hole that’s left. These holes grow into the scallops visible here as more and more ice is lost.

You can see those holes near the top of the scallop’s slopes.

This particular set of scallops is located just south of Hellas Basin at latitude 58 degrees south, in a region where many such scallops have been found. It is also the same region where scientists have located evidence of ice in the cliffs of scarps, similar to the scallops but much steeper. While the formation processes for the scallops and scarps are probably similar, they might not be exactly the same, as Byrne explained to me in an email.

They’re similar in that they form in the same surface water ice layer from sublimation. We don’t really understand how the icy scarps form though. The scallops are easier to explain.

A September 2020 cool image post of similar scallops in this same region covered these same questions, noting especially that it only takes a layer of dust and debris a mere four inches thick to protect the ice from sublimating away. Therefore, there could be a lot of undiscovered ice on Mars, as yet unseen because no landforms, such as scallops, suggest its presence just under the surface.