The range for exposed ice scarps on Mars keeps growing
February 12, 2020 at 9:20 am Robert Zimmerman Points of Information 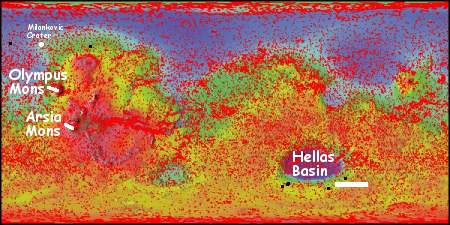 In January 2018 scientists announced the discovery of eight cliffs with visible exposed ice layers in the high mid-latitudes of Mars. At the time, those eight ice scarps were limited to a single crater in the northern hemisphere (Milankovic Crater) and a strip of land in the southern highlands at around latitude 55 degrees south.

In the past two years scientists have been using the high resolution camera on Mars Reconnaissance Orbiter (MRO) to monitor these scarps for changes. So far they have seen none, likely because the changes are below the resolution of the camera.

They have also been able to find more scarps in the southern hemisphere strip beyond that strip at 55 degrees south.

Now they have found more scarps in the northern hemisphere as well, and these are outside Milankovic Crater. As in the south, the new scarps are still all along a latitude strip at about 55 degrees.

The map above shows with the black dots the newer scarps located in the past two years. The scarp to the east of Milankovic Crater is typical of all the other scarps, a steep, pole-facing cliff that seems to be retreating away from the pole..

The scarp to the west of Milankovic Crater is striking in that it is actually a cluster of scarps, all inside a crater in the northern lowland plains. Moreover, these scarps are more indistinct, making them more difficult to identify. According to Colin Dundas of the U.S. Geological Survey’s Astrogeology Science Center in Arizona, 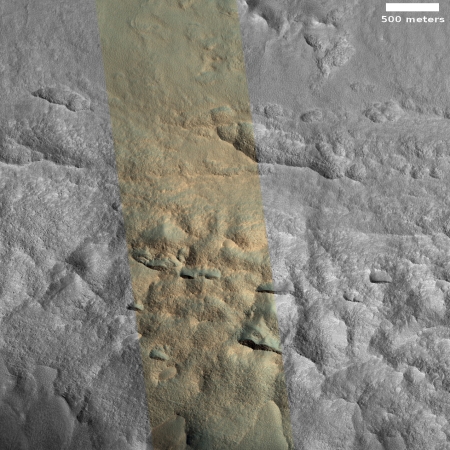 One of the scarps in that image has some very slight bluish coloration and the morphology is basically similar. Our interpretation is that these are scarps that have become covered by a lag of dust as they sublimate, rather than shedding the dust to keep a good exposure of ice. That would also account for the less-distinct appearance.

The image to the right shows this cluster of indistinct scarps, all located on interior slope of the crater’s south rim.

Dundas also hinted in his email to me that they have found even more scarps in the north. In March at the 51st Lunar and Planetary Science Conference in Texas, he will be presenting more results on this subject [pdf]. As I will be attending this conference, I will be able to get the most up-to-date results for my readers.