Scientists: Viking-1 might have landed on a field of Martian tsunami debris
December 1, 2022 10:26 am Robert Zimmerman 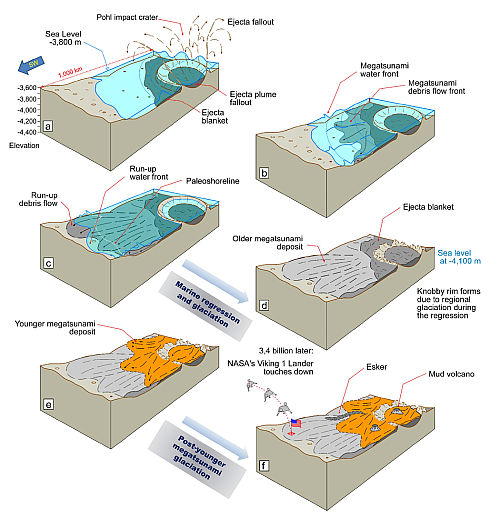 As outlined in their new paper [pdf], a team of scientists now hypothesize that the features that surrounded Viking-1 when it landed on Mars in 1976 were caused by two past Martian tsunamis. Each tsunamis occurred due to an impact in the theorized ocean that is believed to have existed in this part of Mars’ northern lowland plains several billion years ago.

The graphic to the right, figure 8 from the paper, shows the hypothesized sequence of events. From the caption:

(a) Pohl crater forms within a shallow marine environment, (b) triggering tsunami water and debris flow fronts. (c) The wave fronts extensively inundate the highland lowland boundary plains, including a section ~ 900 km southwest of the impact site. (d) The ocean regresses to ~ − 4100 m, accompanied by regional glacier dissection, which erode the rims of Pohl and other craters. (e) The younger tsunami overflows Pohl and parts of the older tsunami. Glaciation continues, and mud volcanoes later source and emerge from the younger tsunami deposit. (f) ~ 3.4 billion years later, the Viking 1 Lander touches down on the edge of the older tsunami deposit.

The overview map below provides the larger context. 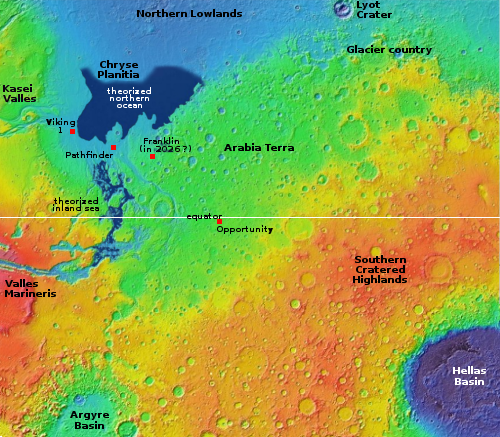 The theorized northern ocean was first proposed by this same science team in a 2019 paper. This new work gathers more of the recent data gathered by orbiters, combines it with past Viking-1 data, and uses this information to run simulations to model the consequences of two impacts during the existence of this northern ocean.

When Viking-1 landed, scientists had expected to find extensive evidence that surface water had once existed at the landing site. From the press release:

Early hypotheses suggested the landing site was on a thick blanket of debris ejected by nearby impacts or broken-up lavas. However, it was also recognized that nearby craters were too few and that lava fragments were rare. The lack of consensus persisted during the six years of operation, leading to an enduring mystery in planetary exploration. “Our investigation provides a new solution – that a tsunami washed ashore, emplacing sediments on which, about 3.4 billion years later, the Viking 1 lander touched down,” Rodriguez said.

As always, there is much uncertainty here, especially because in situ research is limited to only two sites (Viking-1 and Pathfinder). The paper however also recognizes that fundamental mystery of Mars — that so far no one has been able to convincingly model a past Martian climate that would allow liquid water on its surface — by including glacial activity in its modeling.

“We find evidence that as the ocean froze and receded, circum-oceanic glaciers developed and eroded the rim of Pohl. The glaciation appears to have been wet based, so it was probably coupled with ice-covered rivers. This is an important result because wet-based glaciation occurs during relatively “warm” climatic conditions, comparable to, say, Greenland today, or Alaska and Norway when the Ice Age ended,” said co-author Kargel of PSI.

As I have noted before in my coverage of Mars research, the science community is increasingly looking at glacial activity as a major component of past Martian geology, something that no one had considered prior to the data from recent orbiters.

(Note: For reasons that only serve to confuse, the scientists decided to call these tsunamis “megatsunamis.” These waves might have been big events, but I can see no difference in size between these and similar very large tsunamis on Earth. To add this extra size modifier that provides no real information is mere jargon, and I have edited the text above, removing it for clarity.)