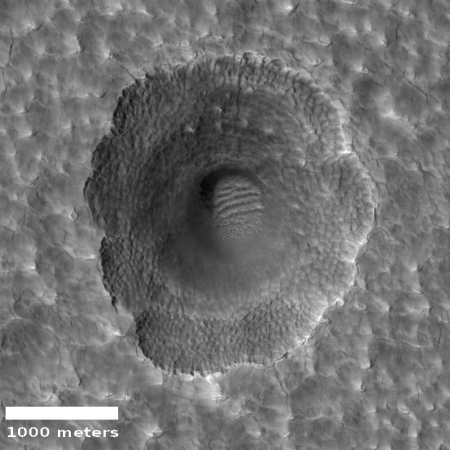 Cool image time! Today the science team for the high resolution camera on Mars Reconnaissance Orbiter (MRO) released a beautiful captioned image of a secondary impact of an object into the icy plains of Utopia Planitia, the northern lowlands northeast of where the rover Perseverance will land in 2021. The image to the right, cropped and reduced to post here, shows one of several secondary craters in the full image. As planetary scientist Alfred McEwen explains in the caption,

One interpretation [for the crater’s unusual appearance] is that the impact crater exposed nearly pure water ice, which then sublimated away where exposed by the slopes of the crater, expanding the crater’s diameter and producing a scalloped appearance. The small polygons are another indicator of shallow ice.

Note the dunes at the bottom of the crater. This has become a trap of wind-blown sand and dust. Note also how this secondary impact gives us a rough idea of the thickness of this ice, based on the area sublimated away.

There is a lot of relatively accessible ice in those northern lowlands, which is why SpaceX likes them for its possible landing site for Starship. That candidate site is in Arcadia Planitia, on the other side of Mars, but it is still in these same northern lowlands, where scientists have found lots of evidence of buried ice.