Sightseeing Central Butte on Mars
November 6, 2019 at 11:38 am Robert Zimmerman Points of Information 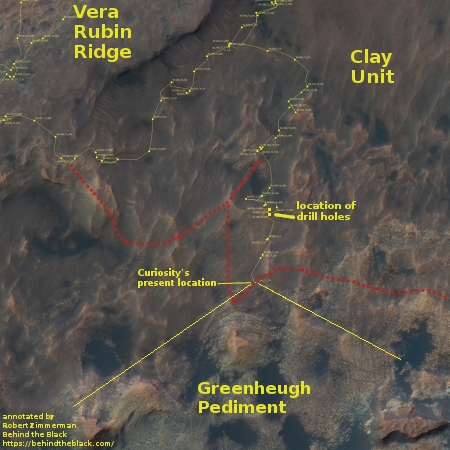 Curiosity has now roved to the very foot of Central Butte, where it has been taking close-up and panorama images of the butte and its geological layers. The panorama above was created from three Curiosity navigation images taken on Sol 2577 (November 6, 2019), here, here, and here.

The overview on the right, based on Curiosity’s position about ten sols ago slightly farther from the butte, still indicates roughly with the yellow lines the area photographed in this panorama. The dotted red line indicates Curiosity’s initial planned route.

Following that route Curiosity will eventually climb up onto the plateau beyond this butte, approaching that higher terrain farther to the west. Once they do, however, they will no longer have access to the geological layers below the surface. Central Butte gives them a window into those layers, which is why they are going to spend some time at this location, first by taking a few sols looking at the butte at this point, then circling around to study its back side.