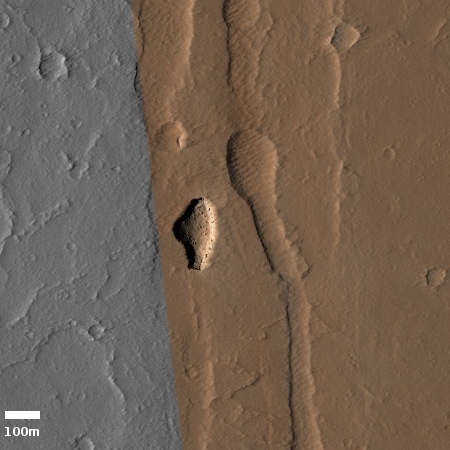 Cool image time! In this week’s exploration of Martian geology that is reminiscent of Earth-based lava geology, today’s image is of a collapse pit in Ceraunius Fossae, the vast region of north-south fissures found to the south of the volcano Alba Mons. The photo to the right, cropped to post here, zooms in on that pit.

The picture was part of the most recent image release from the high resolution camera on Mars Reconnaissance Orbiter (MRO). What makes it especially interesting is the sharpness of its rim, in comparison to the collapse channel to the east. This suggests the pit is younger and fresher than the channel, and happened more recently. This also implies that the voids below the ground in which the surface is sinking are either still there, or due to on-going processes might be still be forming (like caves are on Earth).

For example, if there is underground ice, temperature changes or even thermal heat from the nearby giant volcanoes could melt that underground ice periodically, allowing it to flow and erode the surrounding material, forming voids. That this pit is located at 30 degrees north latitude, just inside the northern hemisphere band where glaciers are found, adds weight to this possibility.

The image below, reduced and rotated so that north is to the left, shows the entire sequence of collapse channels, with the more distinct pit from above in the bottom center of the picture. 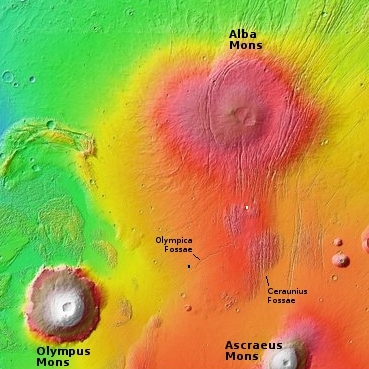 To the right is the same overview map that I posted yesterday, amended to show yesterday’s image with a black box and today’s image by the white box.

The void that might be causing this collapse is however not likely to be a lava tube (though this possibility cannot yet be entirely dismissed). The numerous giant fissures in Ceraunius Fossae are mostly not the result of a collapses because of underlying lava tubes, but instead are what geologists call grabens, formed when tectonic forces pull apart the surface, created gaps that material can slide or collapse into.

These fissures highlight the unusual nature of Alba Mons itself. Despite being the largest Martian volcano in terms of area, far greater than Olympus Mons (as shown in the overview map), it is not very tall. While the fissures suggest they were formed by the volcano itself as it pushed upward, it is also possible that a geological interaction with the other nearby volcanoes, Olympus Mons and the chain of three to its west, contributed. In addition, buried glaciers have been documented scattered about within Ceraunius Fossae, and there is evidence in the area of erosion due to some sort of flows, either water, ice, or lava.

Not surprisingly, at this time no one has yet disentangled these facts. We simply don’t know enough. Our knowledge, while vastly improved by the data from our Mars orbiters, is still too superficial. We need to land there and dig down into the surface.

Who wants to go?