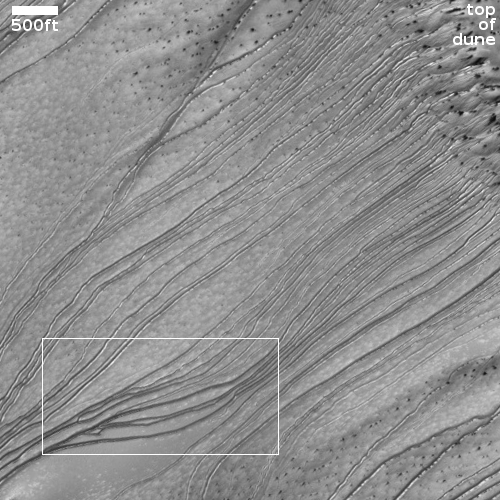 Today’s cool image is an update on a previous cool image published in April 2020 about how scientists believe the grooves seen on the slope of a giant dune in Russell Crater on Mars are believed to be formed by frozen blocks of carbon dioxide sliding down the slope when spring arrives. The photo to the right, taken on March 3, 2020 by the high resolution camera on Mars Reconnaissance Orbiter (MRO) and rotated and cropped to post here, shows these grooves. As I wrote then,

Because the block is sublimating away, the gas acts as a lubricant so that it can slide down the hill. If large enough, the dry ice block will stop at the base of the hill to disappear in a small pit. If small enough, it actually might completely vaporize as it slides, explaining the grooves that appear to gradually fade away.

The scientists actually did a test on Earth, buying a dry ice block at a grocery store and releasing it at the top of a desert dune. Go to my April 2020 link above to see the very cool video.

Several planetary scientists did further combing through many MRO photos of this dune and now think they have spotted examples where the camera actually captured a block as it was sliding downhill. 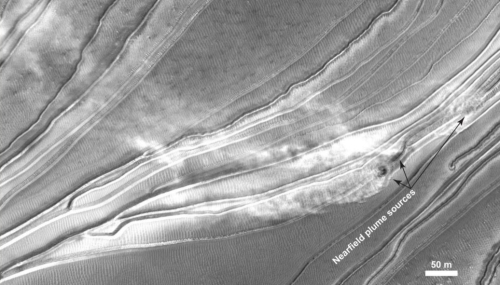 The photo to the right, taken from the supplementary material to their paper, shows the area in the white box above but this time with plumes rising from three places in one groove. From their abstract:

We present satellite imagery of airborne dust plumes lofted by mobile ice blocks sliding down gullies in 2007, 2012, and 2016, captured by two cameras onboard Mars Reconnaisance Orbiter at nearly the same position in the Martian orbit, demonstrating that the activity is seasonal and predictable. The sliding ice blocks agitate dust resting on the surface, thereby generating easily recognizable billowing plumes of dust. Fine‐grained dust is suspended in the atmosphere where it can travel longer distances before settling, whereas coarse‐grained dust saltates away from gullies, settles, and forms bright fringes around the dark sand of active gullies.

Russell Crater is located at about 54 degrees south latitude in the southern cratered highlands. During the winter it is close enough to the pole so that some carbon dioxide in the atmosphere falls as snow to form patches of dry ice on the south-facing slopes of the dune, which get much less sunlight and are mostly in shadow during the winter months. It appears it is that dry ice that slides down the dune’s slopes.