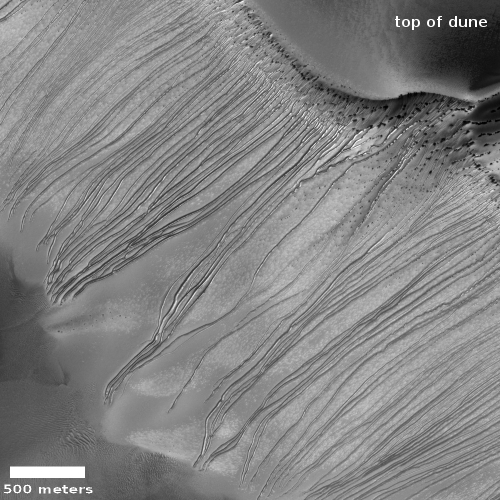 Cool image and video time! The image to the right, cropped and reduced to post here, shows something that when I spotted it in reviewing the newest image download from the high resolution camera on Mars Reconnaissance Orbiter (MRO), I found it very baffling. The photo was taken on March 3, 2020, and shows an incredible number of linear groves on the slope of a large dune inside Russell Crater, located in the Martian southern highlands at about 54 degrees south latitude.

If these were created by boulders we should see them at the bottom of each groove. Instead, the grooves generally seem to peter out as if the boulder rolling down the slope had vanished. Making this even more unlikely is that the top of the slope simply does not have sufficient boulders to make all these groves.

The image was requested by Dr. Candice Hansen of the Planetary Science Institute in Tucson, Arizona, who when I emailed her in bafflement she responded like so:

You will love the explanation for this one! (-:

We think that the grooves are formed from blocks of dry ice breaking off at the top and sliding down the sand dune.

…What is really fun (at least if you are a nerd like me) is to go to the grocery store and buy a block of dry ice, then head to any nearby sand dunes. The block will levitate and slide down if the sand is compact enough.

Because the block is sublimating away, the gas acts as a lubricant so that it can slide down the hill. If large enough, the dry ice block will stop at the base of the hill to disappear in a small pit. If small enough, it actually might completely vaporize as it slides, explaining the grooves that appear to gradually fade away.

Hansen and her colleagues actually did this, and posted the video of it on youtube.

Though the dune on Mars is in the high mid-latitudes, Hansen explained that it is possible for carbon dioxide to condense into a solid on Mars at latitudes as low as 20 degrees. “We think carbon dioxide gets cold-trapped up in the alcoves at the crest of the dunes.”

The idea is so strange however that it apparently never sunk in. Maybe this image will help me remember it the next time I see boulder tracks on Mars, made by boulders that have vanished.