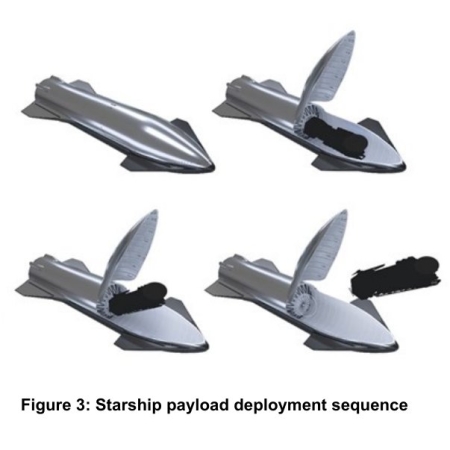 Capitalism in space: Even as SpaceX has begun preparing its third Starship prototype for new testing, it has also released a first user manual for the rocket, outlining its proposed capabilities and potential uses by customers.

The next round of testing is anticipated to begin this week with cryogenic proof testing. These tests will see the vehicle filled with liquid nitrogen at cryogenic temperatures and flight pressures. Prior Starship test vehicles have had their campaigns cut short by failed cryogenic testing, including the last flight vehicle SpaceX rolled to the Boca Chica launch pad, Starship SN1.

If all goes right, they hope to begin short flight tests with this prototype, moving to longer and higher flights with the next.

The user manual [pdf] is mostly a short description of what they hope they will be able to accomplish with Starship. It notes that they will build both a cargo and manned variety, and that both will be available for point-to-point transportation on Earth. It also notes:

Starship has the capability to transport satellites, payloads, crew, and cargo to a variety of orbits and
Earth, Lunar, or Martian landing sites. Potential Starship customers can use this guide as a resource for preliminary payload accommodations information.This is the initial release of the Starship Users Guide and it will be updated frequently in response to customer feedback.

I guarantee that much of what is written and drawn here, such as the illustration above, will change significantly as development proceeds.