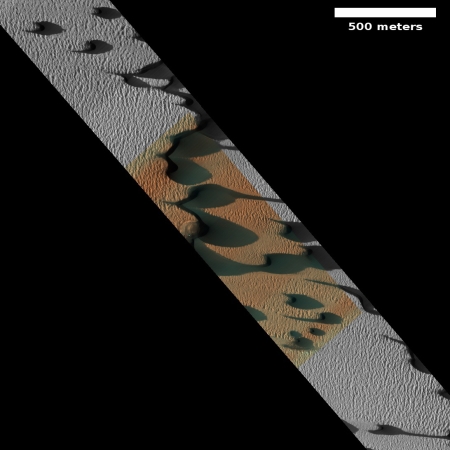 In doing my normal exploration through the monthly download of new images from the high resolution camera on Mars Reconnaissance Orbiter (MRO), the last to occur near the end of February, I came across a slew of 49 images, each labeled as an “ADC Settings Test,” each covering a completely different location with no obvious single object of study, almost as if they were taken in a wildly random manner.

The image to the right, cropped and reduced to post here, is a typical example. It shows the mega dunes located near the end of the canyon Chasma Boreale that cuts a giant slash into the Martian north polar ice cap, almost cutting off one third of the icecap.

The black areas are shadows, long because being at the high latitude of 84 degrees the Sun never gets very high in the sky, even though this image was taken just before mid-summer, when the Sun was at its highest.

I was puzzled why these images were being taken, and contacted Ari Espinoza, the media rep for the high resolution camera, to ask if he could put me in touch with a scientist who could provide an explanation. He in turn suggested I contact Shane Byrne of the Lunar and Planetary Lab University of Arizona, who coincidentally I had already spoken with several times before in connection with the annual summer avalanche season at the Martian north pole.

Dr. Byrne first suggested I read this abstract [pdf], written for the 2018 Lunar and Planetary Science conference by the camera’s science team. In it they outline two issues with the camera, one blurred images and the second an increasing number of bad pixels occurring in images over time.

The first problem has since been solved. To preserve battery life — another long term problem that they have to deal with — they had adjusted the orbiter’s orbit slightly to get more sunlight and stopped warming the camera during the night periods. “That had the unfortunate effect of changing the camera’s focus,” explained Byrne. “Since we understand that now, we do warm-ups before taking the images and that fixed the blurring problem.”

The other problem however remains, and these ADC test images are an effort to fix it.

Since the first orbital missions in the 1960s space engineers have had to deal with a phenomenon they dub bitflips, where for a variety of reasons a binary data point flips from 0 to 1, or visa versa. These can happen randomly, and are mostly thought to occur due to the high radiation environment of space. For example, a cosmic ray might hit a computer’s memory chip and flip a bit.

Most space equipment is well hardened to protect it from these bitflips, but they still happen periodically. On MRO they found they could mitigate the issue by warming the camera (which is one of the reasons they periodically take random unrequested images). By taking a picture they can raise the camera’s temperature a measurable amount, thereby regulating it.

The concern is that the problem has been getting worse with time, requiring them to warm the camera an additional 2.7 degrees Fahrenheit per year. “Right now the temperature is way higher than anything we ever thought we’d run the camera at,” notes Byrne. “Way higher than the people who built the camera are comfortable with.”

Since they can’t keep raising the camera’s temperature ad infinitum, the ADC settings test images were taken as an attempt to find a different solution that would not require heating the camera. ADC stands for Analog-to-Digital-Conversion. This is the software that changes the analog photon data received by each pixel and converts it to a digital number. They theorize that they might be able to change how the software converts the waveform to digital information in such a way to reduce the number of bitflips, without affecting the overall data itself.

At this moment however they do not yet have an answer, having just taken the images. “We still have to analyze the data,” explains Byrne. They also want to do more tests. If all goes well they hope to complete this work within a year.

This story, one of many faced every day by space engineers, illustrates the difficulties of building and operating a spacecraft millions of miles away. In concept the technology might be relatively simple. In practice the engineering is incredibly complex, and great care must be done not only to keep things running properly, but also to make sure the data obtained is understandable and reliable.

Think about this the next time you hear someone nonchalantly wax poetic about how they are only a few years away from mining the Moon and the asteroids or colonizing Mars. It will help you separate the wheat from the chaff.

We will eventually do all these things, but we won’t do it by underestimating the challenge.