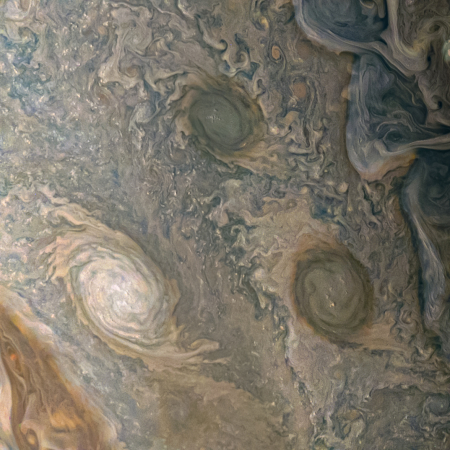 The image on the right, reduced to post here, was created by Citizen scientist Kevin Gill from recent Juno images taken of Jupiter, and shows in detail some of the many storms that fill Jupiter’s many bands of color.

We do not have a scale, but my guess is that these storms are probably about the size of the Earth, which means these storms are bigger than any hurricane you can imagine. If you click on the image to look at the full resolution photograph, you can see there are tiny white clouds clumped in the middle of the picture’s three biggest storms. Those clumps are probably also bigger than any single clouds you could find anywhere on Earth.

As I wrote in a post in April 2017 about a similar Juno image:

What should fill us with even more awe is that this only covers a very thin slice of the top of Jupiter’s deep atmosphere. The planet itself is about 89,000 miles in diameter, more than ten times larger than Earth. The depth of its atmosphere is not really known, but it must be deeper than several Earths, piled on top of each other. In that depth there must be many atmospheric layers, each thicker and denser than the one above, and each with its own weather systems and complexities.

It will take centuries of research, including the development of new engineering capable of accessing this place, to even begin to map out its meteorology. And this is only one gas giant, of what we now know must be millions and millions throughout the galaxy.

If we have the nerve and daring, the human race has the opportunity to go out there and never be bored. There will always be something unknown to discover.

All that still applies. We have only just begun our journey exploring the universe.