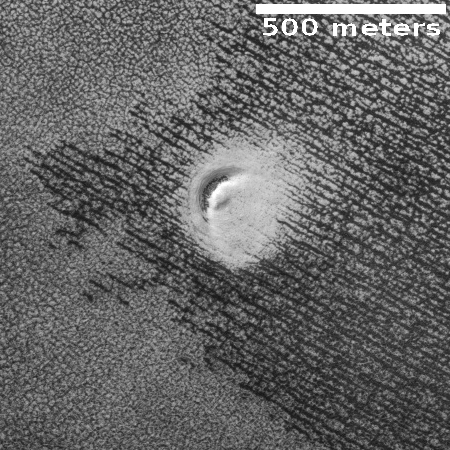 Cool image time! The south polar cap of Mars is a strange place. It is largely ice, with a seasonal cap of frozen carbon dioxide, or dry ice. Because the dry ice sublimates away during the summer months, the cap undergoes regular changes that reshape it, producing alien features that are not seen on Earth.

The image on the right is another example of these alien features. I found it in the February image release from the high resolution camera on Mars Reconnaissance Orbiter. I have merely cropped the full image to focus at full resolution on its primary feature, a region of stippled-like surface surrounding an area of black striping that in turn surrounds a crescent-shaped pit outlined by whiter material.

Why is there a pit here? Why is it crescent-shaped? Why is it surrounded by that whiter material? I could guess and say that the pit is a vent from which water vapor from the lower cap of water sprays out onto the upper cap of frozen carbon dioxide, staining it with white ice, but I am most likely wrong.

Moreover, what causes the black striping, as well as the stippled material surrounding it? The black stripes are probably related to a similar process that forms the spider formations found in the polar regions, except that these are not spiders. Why the parallel straight lines?

A lot of questions with no answers. While many features on Mars are strange, the features near the poles are probably stranger still, as they form in a place with chemistry, temperatures, gravity, and materials in a combination and scale that we on Earth have no experience with.