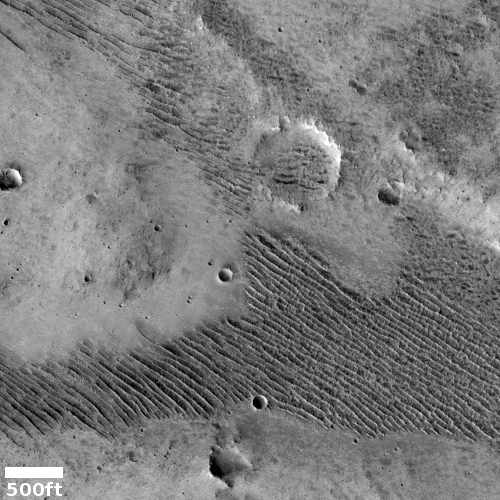 Today’s cool image is once again another of what I dub a “what the heck?” photo. The picture to the right, cropped to post here, was taken on December 17, 2020 by the high resolution camera on Mars Reconnaissance Orbiter (MRO) and captures some very strange ridges on the plateau above Mars’ biggest canyon, Valles Marineris.

The image, labeled merely as a “terrain sample,” was taken not as part of any specific research project but scheduled by MRO’s science team in order to maintain the camera’s temperature. When they do this they try to take pictures covering something interesting, but often it is a potshot that sometimes shows little of interest.

In this case the photo shows something very strange. The ridges in the sample are packed into one area only, but if you look at the full image you will see that they are also scattered about randomly and sometimes isolated on the flat plains surrounding this spot.

Interestingly, these ridges resemble the first “What the heck?” image I ever posted in 2019. That photo was located at about the same elevation as these ridges, but due west in the volcanic plains near Mars’s giant volcanoes and just off the western edge of the overview map below.

The white cross marks the location of these ridges, located in the isolated plateau formed by two branches of the giant Valles Marineris canyon.

With both today’s image and the 2019 one, the ridges are aligned, and only appear in patches.

At first glance the consistent ridge alignment suggests they might have been carved by some form of wind erosion, based on the long term direction of the prevailing winds. However, they do not look like sand dunes, as they are sharp and jagged. Moreover, if these are some form of ripple dunes, why are they found in patches, in some places but not others?

Maybe volcanism was involved in forming these ridges, though my limited geological knowledge is unaware of any volcanic process that might result in aligned ridges such as these.

I am sure a deep dive into the published literature of Martian geology will find some paper proposing an explanation, but for now I simply present these to my readers, so that you can scratch your heads as I do.